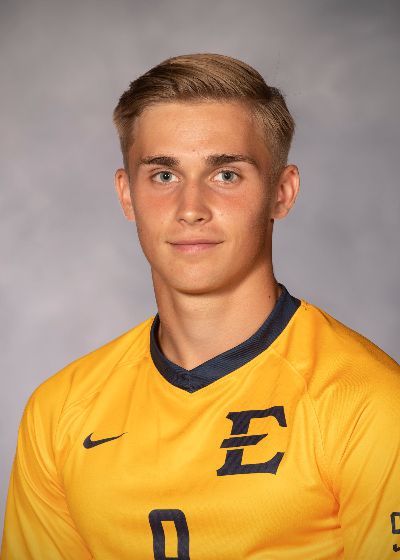 2021 Fall: First Team all-SoCon selection ... Named to SoCon All-Academic Team and earned SoCon Commissioner's Medal ... Member of the SoCon Honor Roll ... Started all 15 games for the Blue and Gold and led the team in goals (10), points (22) and shots (48) ... Notched goals in seven games, including three two-goal performances ... The 10 goals were the second-most in ETSU single-season history, while ranking among NCAA Division I leaders in several statistical categories ... Ranked 16th in shots on goal per game (1.73), 17th in goals per game (0.67), 26th in total goals (10) and 28th in points per game (1.47) ... Earned a pair of SoCon Player of the Week honors as he picked up his first weekly award following a brace in the 3-3 draw against Wofford on Oct. 2 and collected the accolade for the second straight week as he notched another two-goal game in the 3-1 win at Northern Kentucky on Oct. 5 ... His first brace of the season came in the 3-3 tie against Lipscomb on Sept. 10 where he registered goals in four of the Bucs’ first five games to start the season ... Two of his goals went for game winners – a 1-0 win over Longwood in the season opener and in the road win at NKU.

Spring 2021: A constant threat on the left side of the attack, Pannholzer made 10 starts on the year, missing out on the SoCon semifinals due to an injury...named to the SoCon All-Freshman Team...led the team in shots (23) and shots on goal (10)...third highest scorer on the team (4), Pannhozer was one of four Bucs to register at least two assists and the only one to have also scored a goal...recorded only the second hat trick in Buccaneer history against VMI (March 30), one of only 17 people the achieve the feat in the NCAA in the 2020-21 season...also added an assist in the win over the Keydets, becoming one of only six players to score seven points in a game that year...was awarded SoCon Offensive Player of the Week (April 6) for his output against the Keydets...13 of his 23 shots came in the final two games of his debut season...was named to the SoCon Honor Roll and received the Commissioner's Medal.

Prior to ETSU: Attended Julius Leber Schule Hamburg in Germany...played in the Youth Bundesliga and Oberliga for FC St. Pauli...scored 11 goals and registered five assists in 16 appearances...a U15 Germany national team member.