ETSU’s seven selections to the Academic All-Conference Teams were the most of any Atlantic Sun institution, and more than double that of the next highest, Florida Gulf Coast’s three.

“The simple fact that these kids are here in search of a degree and competing in a Division I school with a great number of responsibilities only exemplifies the hard work, achievement, and dedication of a student athlete,” ETSU Men’s Tennis head coach Yaser Zaatini said.

Brumit, who balanced rigorous academic and athletic workloads, has attained a nearly impeccable 3.98 GPA as an exercise science major and plans to attend medical school upon graduation. She becomes the third consecutive ETSU women’s tennis player to be named the A-Sun’s Women’s Tennis Scholar Athlete of the Year, following Paula Jaime (2012) and Lyn Yee Choo (2013).

On the court, Brumit posted an overall singles record of 20-3, including a perfect 7-0 record in league play, and was ranked as high as No. 118 nationally by the ITA. In doubles play, Brumit finished the season 13-3, teaming with Andreazza to go 6-1 in A-Sun competition.

Brumit, Espana, Gerbasi, and Andreazza accounted for half of the representatives on the Women’s Academic All-Conference Team.

“To have over half of the team earn academic honors is a testament to how hard these girls work both on and off the court,” ETSU Women’s Tennis head coach Travis Sandlant said.

In late March, Espana emerged from a field of hundreds of candidates to receive the NCAA’s prominent Ethnic Minority and Women's Enhancement Programs' Postgraduate Scholarship for Careers in Athletics which will allow her to continue her education at a postgraduate level at a school of her choosing. 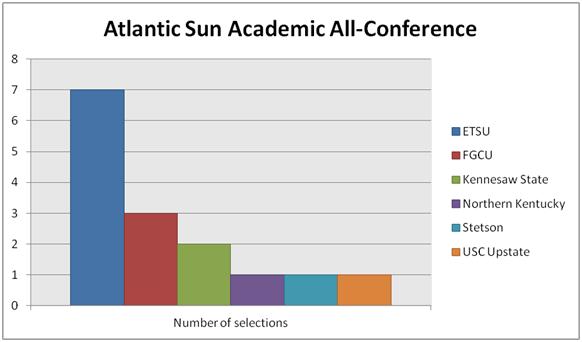 Merino, a pre-business major, maintained an impressive 3.92 GPA en route to posting a 7-0 A-Sun singles record and helping lead ETSU to a share of the 2014 A-Sun Regular Season Title.

“I’m so happy and proud of Ismael [Merino],” Zaatini said. “He is a wonderful, responsible and dedicated person, and a great teammate and friend. We are lucky to have him in the ETSU family.”