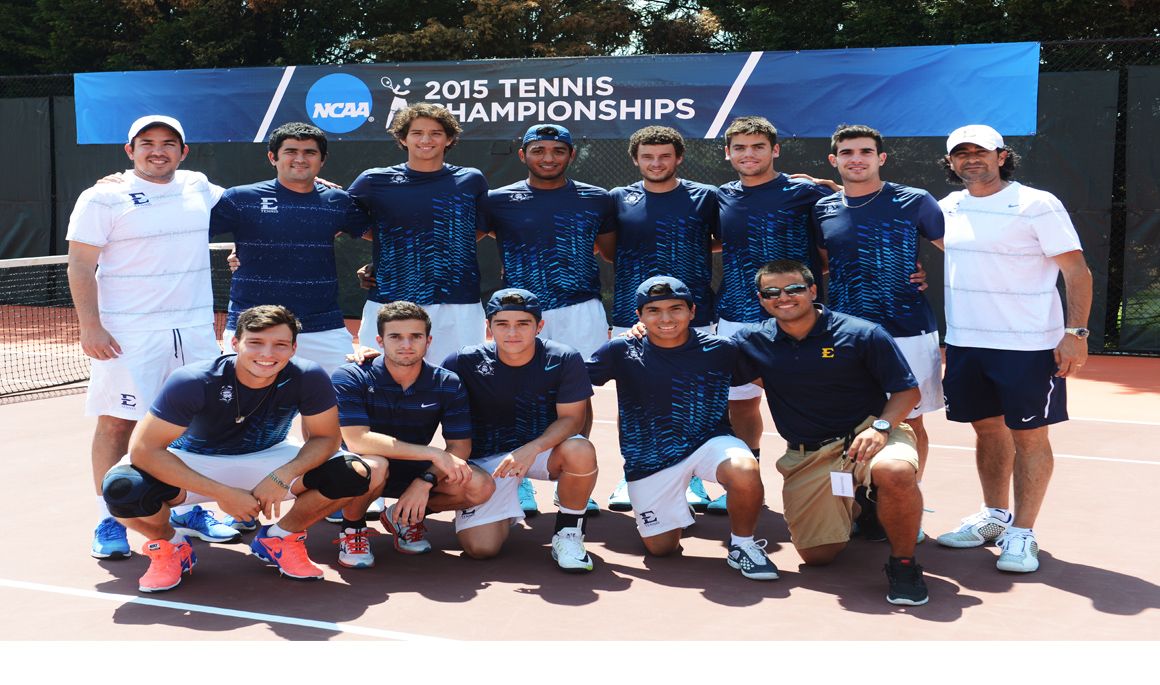 ETSU poses tough test for nationally-ranked Hokies, but is edged, 4-1, to close 2015 campaign

BLACKSBURG, Va. (May 8, 2015) - The ETSU men's tennis team pushed No. 15 Virginia Tech to the brink of defeat Friday in the opening round of the NCAA Division I Men's Tennis Championship, but the Hokies outlasted the Bucs' comeback attempt as Virginia Tech edged ETSU, 4-1, in Blacksburg, Va.

Diego Nunez (Monterrey, Mexico) and Conner Huertas (Lima, Peru) announced the Bucs' (17-8) intentions immediately out of the gate in doubles play, jumping out to a 6-0 lead at the No. 3 spot before eventually earning an 8-1 victory.

The Hokies (20-4) drew the doubles score even at 1-1 as the 39th-ranked duo of Andreas Bjerrehus and Hunter Koontz defeated David Biosca (Sant Fruitos de Bage, Spain) and Rogerio Ribeiro (Sao Paulo, Brazil), 8-2, at the No. 1 position.

Despite getting out to a 3-2 lead at No. 2, Ismael Merino (Lima, Peru) and Robert Herrera (Barcelona, Spain) were edged, 8-5, in the decisive doubles decision, allowing the Hokies to take a 1-0 match advantage into singles play.

Virginia Tech extended its overall match lead to 3-0 with wins at No. 3 and No. 2 Singles, respectively; however, with their backs against the wall, the relentless Bucs battled back.

At the top singles spot, Biosca, the reigning SoCon Men's Tennis Player of the Year, earned a straight-set victory over 68th-ranked Amerigo Contini, 7-5, 6-2, to trim the Bucs' deficit to 3-1.

After falling, 6-1, in the opening set at No. 4 Singles, Sebastian Yllera (Cinco Saltos, Argentina) fought back.  Yllera forced a third set by taking the second set, 6-3, to keep the Bucs' comeback hopes alive.

With the nationally-ranked Hokies reeling and steadily losing momentum, Koontz stepped up for Virginia Tech at No. 4 Singles, outlasting Yllera, 6-2, to clinch the hard-fought, 4-1 victory and send the Hokies to the second round for the second time in the last three years.

"Obviously, they were a little bit better than us, and we came up short," ETSU head coach Yaser Zaatini said. "We knew we could compete, and we've been here several times. Unfortunately, we met up with a very tough Virginia Tech team and they managed to pull it out."

I'm extremely proud of the way we competed," Zaatini said. "It is not the result we wanted, but we have to live with it."

Virginia Tech improved its 2015 home record to 12-0 with the victory.

The Hokies will take on No. 18 South Florida in a second-round matchup Saturday, May 9, which will also be played on Virginia Tech's home turf in Blacksburg.

ETSU, which was making its ninth-consecutive NCAA Championship appearance, will return all but one player next season.