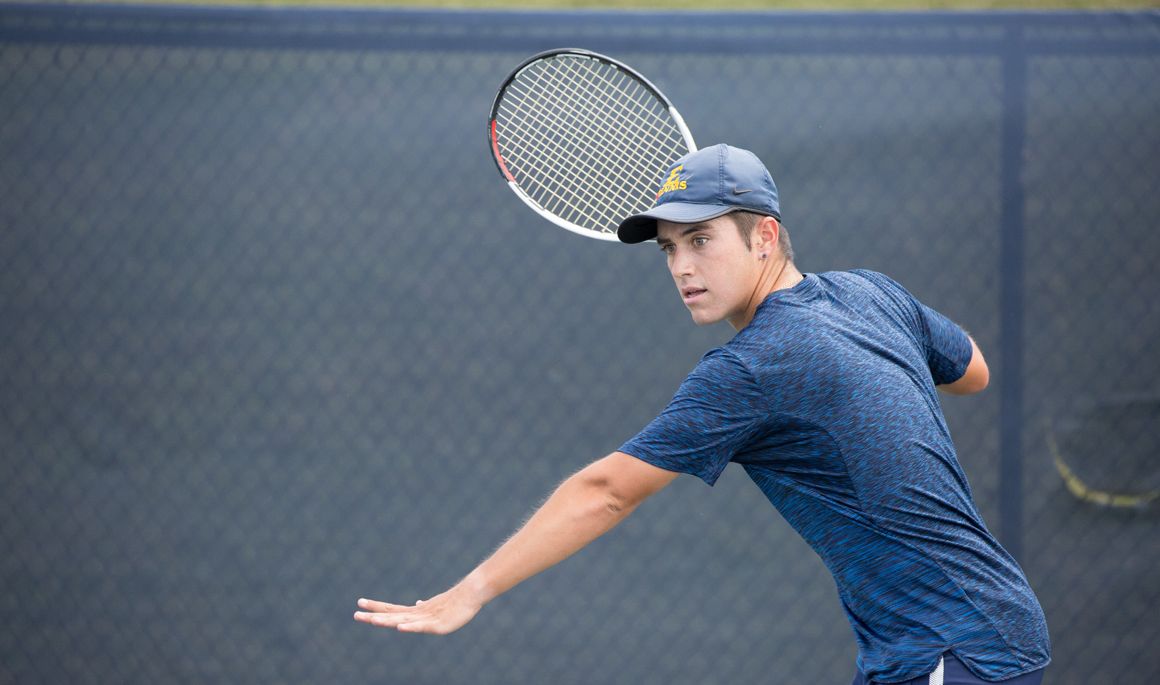 Herrera set to compete in championship in his draw

BIRMINGHAM, Ala. (Nov. 11, 2017) – It was a successful first two days for the ETSU men’s tennis team as they compete in the CCB Collegiate Invitational hosted by The University of Alabama. Four Buccaneers are competing in singles and combining together to compete as doubles.

In the Crimson Singles Draw, Robert Herrera (Barcelona, Spain) won his first match against Pelayo Antuna from Troy. Herrera battled for a 6-4, 4-6, 6-3 win. He then moved on to play Mathieu Garcia from Partland and won 6-2, 6-0. Herrera continued to play well as he won his third match at the CCB Collegiate Invitational after defeating Hamish Stewart from Tulane, 6-4, 6-2. He will take on UAB’s Tim Dollman on Sunday in the championship round. The match is set for 9:00 a.m.

Also in the Crimson Singles Draw was Juan Lugo (Maracay, Venezuela). Lugo lost a close match of 6-3, 7-6 (3) to Loic Cloes from South Alabama. He was then defeated by Tim Tuetzel from Tulane after putting up another strong fight of 7-5, 4-6, 6-2. He bounced back to beat Southern Mississippi’s Tortrakul 6-2, 6-2. He will take on Pelayo Antuna from Troy on Sunday at 10:30 a.m.

Frazier Rengifo was the only Buc to compete in the White Singles Draw. He won he first match of 7-5, 6-3 against Portland’s Carlos Donat, but then fell to Alabama’s Zhe Zhou 6-4, 6-4. Rengifo then took on Stefan Gonzalez from UAB and won 6-2, 6-4. He will compete against Eduardo Lourido from Samford at 10:30 a.m. on Sunday.

Lastly in singles competition Tasei Miyamoto (Chiba, Japan) competed in the Houndstrooth Singles Draw. He won his first match against South Alabama’s Nathan Fruh, 7-5, 6-1. He was then defeated by Mikhail Esopov from Southern Mississippi, 6-1, 6-4.  Miyamoto defeated Antonio Selma from Troy in three sets, 5-7, 6-3, 6-2. He will take on Santiago de Loreto from South Alabama on Sunday, also at 10:30 a.m.

In the doubles competition, Lugo and Rengifo combined to compete in the Crimson Doubles Draw. They won their first match against Alabama 8-4, but then fell to Samford 8-5 in the next round. Lastly, they played UAB’s duo, but dropped the match 8-6.

Herrera and Miyamoto then paired up in the White Doubles Draw. They first beat Troy 8-5, then paced past Lipscomb 8-7 (3) and then cruised past South Alabama 8-6 to win the championship.

Singles action will resume on Sunday at 9:00 a.m. in Birmingham, Ala.