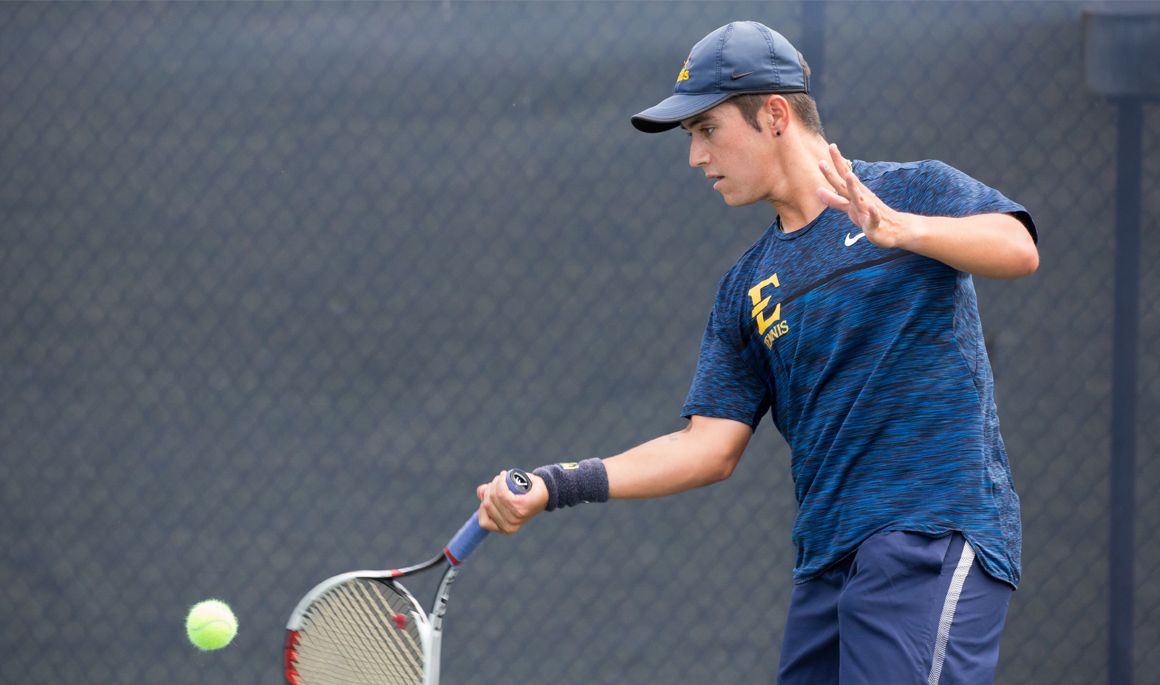 JOHNSON CITY, Tenn. (Feb. 24, 2018) – The ETSU men’s tennis team hosted the UCNG Spartans in their first conference match of the season. The Bucs downed the Spartans with a score of 6-1 at the Dave Mullins Tennis Complex on Saturday morning. The Bucs improve to 5-4 overall and 1-0 in conference, while the Spartans drop to 4-3 and 0-1 in the conference.

Miguel Este (Caracas, Venezuela) and Frazier Rengifo (Cali, Colombia) started things off for the Bucs with a 6-2 win at the No. 3 singles. Sergi Fontcuberta (Barcelona, Spain) and Robert Herrera (Barcelona, Spain) clinched the doubles point with a 6-2 win. It was a special win for Herrera, as he picked up his 100th career win at ETSU. Juan Lugo (Maracay, Venezuela) and Tasei Miyamoto (Chiba, Japan) completed the doubles sweep with a 6-3 win at the No. 1 spot. The duos of Herrera and Fontcuberta and Lugo and Miyamoto stay undefeated in doubles with their wins to improve to 3-0.

The Bucs shifted their momentum over into singles play. Frazier Rengifo picked up the first singles win for the Bucs. He defeated Daniel Hammarstedt 6-2, 6-1. David Gonzalez (Barcelona, Spain) then added to the Bucs’ success after he won 6-0, 6-1 against Ian Melnik. UNCG won their only match of the day at the No. 1 spot. Connor Thompson defeated Herrera 6-4, 6-1, but that wasn’t going to stop the Bucs from their winning ways, as they won three straight matches. Sergi Fontcuberta won 6-3, 6-3 over Ollie Palmer at the No. 3 spot, followed by Miguel Este who defeated Jack Burkill 7-5, 6-3. Juan Lugo capped things off for the Bucs with a 7-5, 6-4 win against Marcus Vidgren at the No. 2 spot.

“It’s always good to start conference play with a win against a good UNCG team,” said head coach  . “Our guys were effective today and executed when needed to do so. Robert picked up his 100th win as Buc, so it was a special day for him. Now we go on the road for three tough matches and we hope to come back with some wins.”