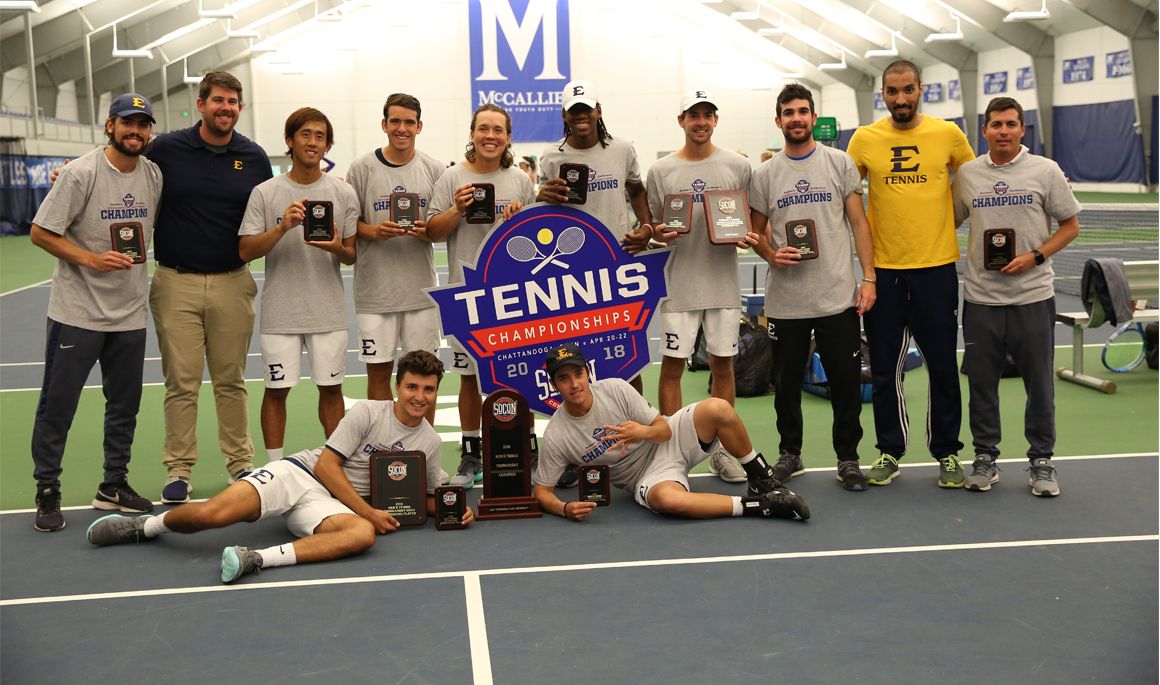 CHATTANOOGA, Tenn. (April 22, 2018) – For the 12th straight year, the ETSU men’s tennis team claimed the conference tournament title, as the Bucs defeated Furman 4-2 in the Southern Conference Championship on Sunday in Chattanooga, Tenn. at the McCallie School.

“Today was one of the best finals I’ve experience as a coach,” said head coach Martin Stiegwardt. “The level was very high and the guys played one of the best matches of the year. To step up like that with all the adversity we had, speaks volumes of this team and how tough and hungry they are. We were leading most of the match and at the end it started to turn, but I felt like Miguel would pull it off. What a great young man he is and how calm he was to close it like that. Juan and David played incredibly well and the doubles was just flawless today. I’m beyond excited for this team and what’s ahead. Go Bucs!”

Furman was able to win the first doubles match with a 6-0 victory at the No. 1 spot, but that wouldn’t stop the Bucs, as they would win back-to-back matches to clinch the doubles point. Sergi Fontcuberta (Barcleona, Spain) and David Gonzalez (Barcelona, Spain) evened the doubles competition with a 6-2 win over Jake Bhangdia and Clarke Wilson. Robert Herrera (Barcelona, Spain) and Miguel Este (Caracas, Venezuela) clinched the team point for the Bucs after the pair defeated Ivan Mitric and Drew Singerman 6-3.

Juan Lugo (Maracay, Venezuela) gave the Bucs a 2-0 lead after he won his respective match at the No. 2 singles spot. Lugo won 6-4, 6-2 over Jake Munns. David Gonzalez then got the Bucs even closer after he earned a 7-6 (7-3), 6-3 win over Drew Singerman at the No. 4 spot. The Paladins fought back to win two consecutive matches to get them within one of the Bucs. Cameron Green and Robert Herrera fought through quite the battle at the No. 1 spot. Green came out on top with the 6-2, 6-7 (5-7), 6-1 win. Clarke Wilson also helped his team with a 6-2, 3-6, 6-3 win over Tasei Miyamoto (Chiba, Japan). A tight-three set battle was coming down to Miguel Este and Jake Bhangdia. Este won the first set 6-3, but Bhangdia edged him 3-6 in the second set. Este fought through a 7-5 win to give the Bucs match point and the Bucs would claim the Southern Conference tournament title.

Sunday’s title marks the fifth straight year that the regular season champion has also won the tournament. It also marks the first time a team has won four straight tournament titles, a feat that previously had not been accomplished in the conference since Chattanooga won eight straight titles from 1978-1985.

The Bucs will now await the NCAA tournament bracket announcement, which will be announced in two weeks.