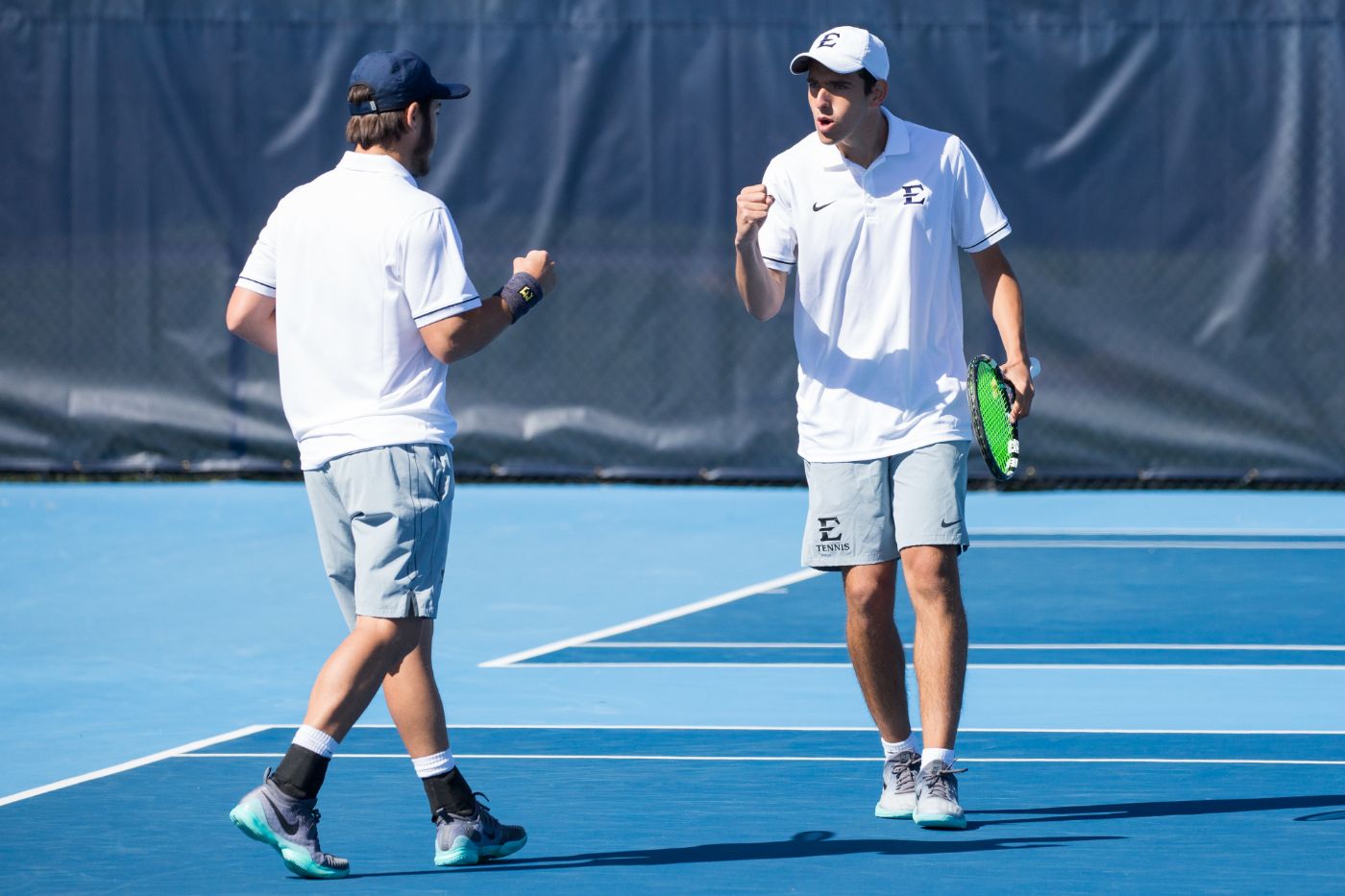 The Bucs duo, seeded 6th in the Division I draw, got a first-round bye and advanced to Sunday’s round of 32 with an 8-4 win over Mico Guillion and Oliver Stuart of Mercer. Up next is a 3:00 pm matchup against Pablo Caffarena and Victor Chaw of Lispscomb, who upset #16 Ignacio Garcia and Alvaro Fernandez of Florida Atlantic in the second round.

A win for Gonzalez and Fortcuberta would put them in the quarterfinals at 4:30 Sunday afternoon. The semifinals and championship match are scheduled for Monday.

In other Division I doubles results, ETSU’s Taisei Miyamoto (Chiba, Japan) and Adam O’Shannessy (New South Wales, Australia) won their first round match, 8-6, over Harvey Maughan and Juan Sebastian Osorio of Kennesaw State, and dropped an 8-3 result to Kiranpal Pannu and Matei Avram of Columbus State.

The Bucs’ pair of Juan Lugo (Maracay, Venezuela) and Mark Papadopoulos (Sydney, Australia) were clipped, 8-7, by Mika Kosonen and Sergio Valinotti of Georgia Gwinnett in the first round.

In his first match, Gonzalez dropped the first set to Daniel Ventura, but lost just one more game after that in a 3-6, 6-1, 6-0 victory. Gabriel DeCamps of Central Florida, the #8 seed, defeated Gonzalez 6-1, 6-3 in the second round. Kosonen got by Gonzalez, 6-2, 7-4, in the Quadrant B compass draw.

Fontcuberta opened with a 6-4, 6-2 win over Marc Mila of Tennessee Tech, then bowed to Rafael Coutinho of Georgia Gwinnett, 6-3, 6-3. Coutinho had upset 9th-seeded Fermin Calvo Barcelo of Kennesaw State in the first round. Fortcuberta’s day ended with a 6-1, 6-4 setback to 6th-seeded Dave Horneffer of Dartmouth in the Quadrant D compass draw.

Lugo began with a 6-4, 7-6 win over Alvaro Fernandez-Horta of Florida Atlantic – taking the second set in a tie-breaker – before a 6-3, 6-3 setback to Oscar Medquida of Arkansas. Lugo then fell to Tommaso Schold of Columbus State, 7-6, 5-1 (retired).

In Division II singles, O’Shannessy – seeded 14th – got upset by Carver Arant of Mercer, 6-2, 6-3 in the first round. The freshman responded with a 6-4, 6-4 victory against Ian Melnik of UNCG, but ended the day with a 6-3, 6-1 loss to Giovanni Araujo of UNC Wilmington.

Miyamoto dropped a three-set heartbreaker to Chase Bernstine of Virginia Tech, 3-6, 6-2, 6-4. Miyamoto bounced back by dispatching Francesco Tacconi of Lipscomb 7-6 (3), 6-3 before a 6-3, 7-5 loss to Fanis Kontopolous of Tennessee Tech in the Quadrant E compass draw.

Chris Mikrovas (Athens, Greece) fell to Robin Moeller of Georgia College, 6-2, 7-5. But he went to sweep Lucca Silva of Tennessee Tech, 6-3, 6-3, before dropping a 6-1, 6-2 result to Fernando Guardia of Mercer. Mikrovas ended the day with a 6-5, 6-1 triumph over Oliver Palmer of UNCG in Quadrant D.

Papadopoulos was defeated by Riku Kubota of Tennessee Tech, 6-4, 6-2, only to recover for a decisive 6-1, 6-2 win over Sebastian Harris of Gardner-Webb. Davide Innocenti of UNC Wilmington downed Papadopoulos, 6-4, 6-4, in Quadrant G.