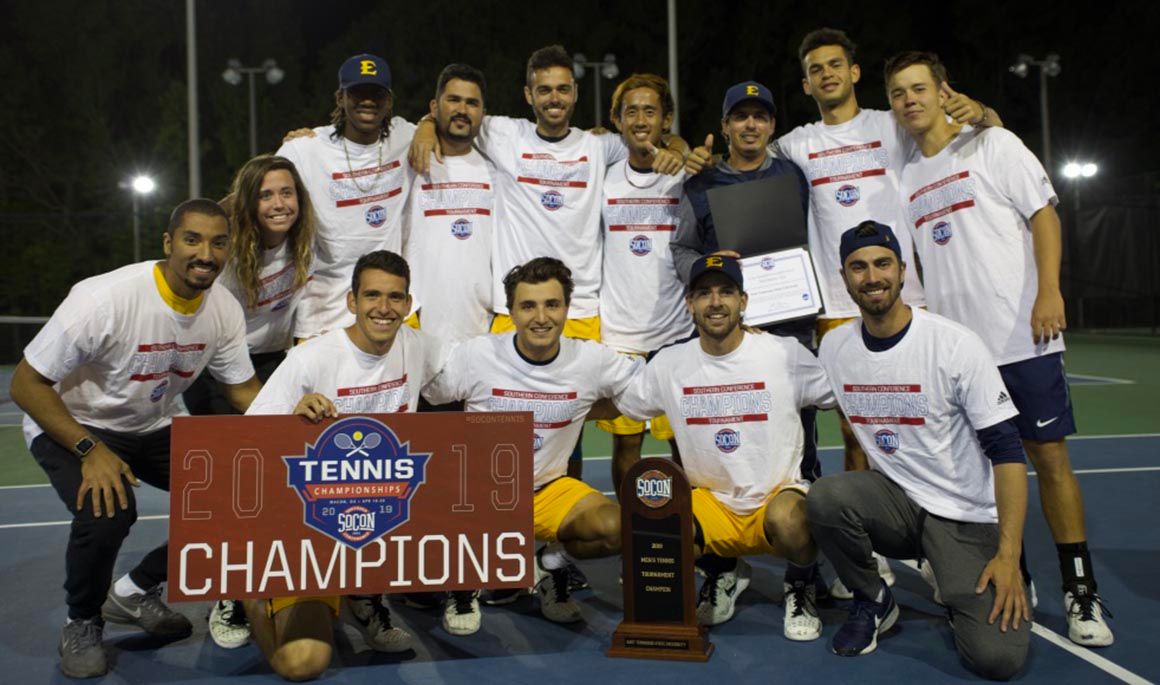 MACON, Ga. (April 20, 2019) – At the end of a long, weather-driven weekend it was the ETSU Buccaneers Men’s Team that was crowned as the 2019 Southern Conference Tournament Champions for the second consecutive year. The Bucs outlasted Furman with a 4-2 victory as five of the six matches went into a tiebreaking set. ETSU was named kings of the SoCon Tennis world for the ninth time in program history, defeating the Paladins in the title match for the second consecutive season.

The match did not start out in favor of the Blue & Gold as the Paladins picked up a pair of 6-2 doubles wins to snatch the doubles point away from the Bucs.

The match was evened at one apiece as Miguel Este (Caracas, Venezuela) did what he does best, winning from the No. 6 singles slot to give ETSU a boost. Este claimed the 7-5, 6-1 victory, his 19th singles win of the spring and his 16th consecutive victory.

The final five singles showdowns proved to be thrillers with each one going into a third set to set the tone for a dramatic SoCon Title finish. It was Frazier Rengifo (Cali, Colombia) that notched the first three-set victory, falling in the first frame 6-4 before rebounding for a pair of 6-1 victories in set two and three. Rengifo’s victory elevated the Bucs on top, 2-1.

Furman drew even with the Blue & Gold from the No. 5 singles hole as Drew Singerman handed David Gonzalez (Barcelona, Spain) a 6-4, 3-6, 6-2 defeat.

ETSU’s own Juan Lugo (Maracay, Venezuela) put the Bucs back on top from the No. 3 singles position with a three-set victory of his own. Lugo and Jake Munns traded a pair of 7-5 set victories before Lugo pulled away in the third set, winning 6-3 and pulling ETSU within one point of the crown.

Leave it up to one of ETSU’s seniors, Sergi Fontcuberta (Barcelona, Spain), to come through in the clutch for the Bucs. Fontcuberta and Clarke Wilson competed in two nail-biting sets to open up the match with Wilson winning the first frame, 7-6(7-5). Fontcuberta rebounded with a critical 7-6(7-4) victory in the second set to force a tiebreaker. The Spain native wore down Wilson in the final set, cruising to a 6-1 victory as the team stormed the court in celebration.

The Bucs were ahead in the final match as Yusuf Khamis (Cairo, Egypt) clung to a 5-4 score in the final set. Khamis won the second set 6-2 after dropping a 7-6(10-8) match in the opening frame.

The Bucs will await the NCAA Men’s Tennis Selection show to find out their opponent in the opening round of the 2019 NCAA Tournament. The selection show will be held on Monday, April 29 at 6 p.m. (ET).