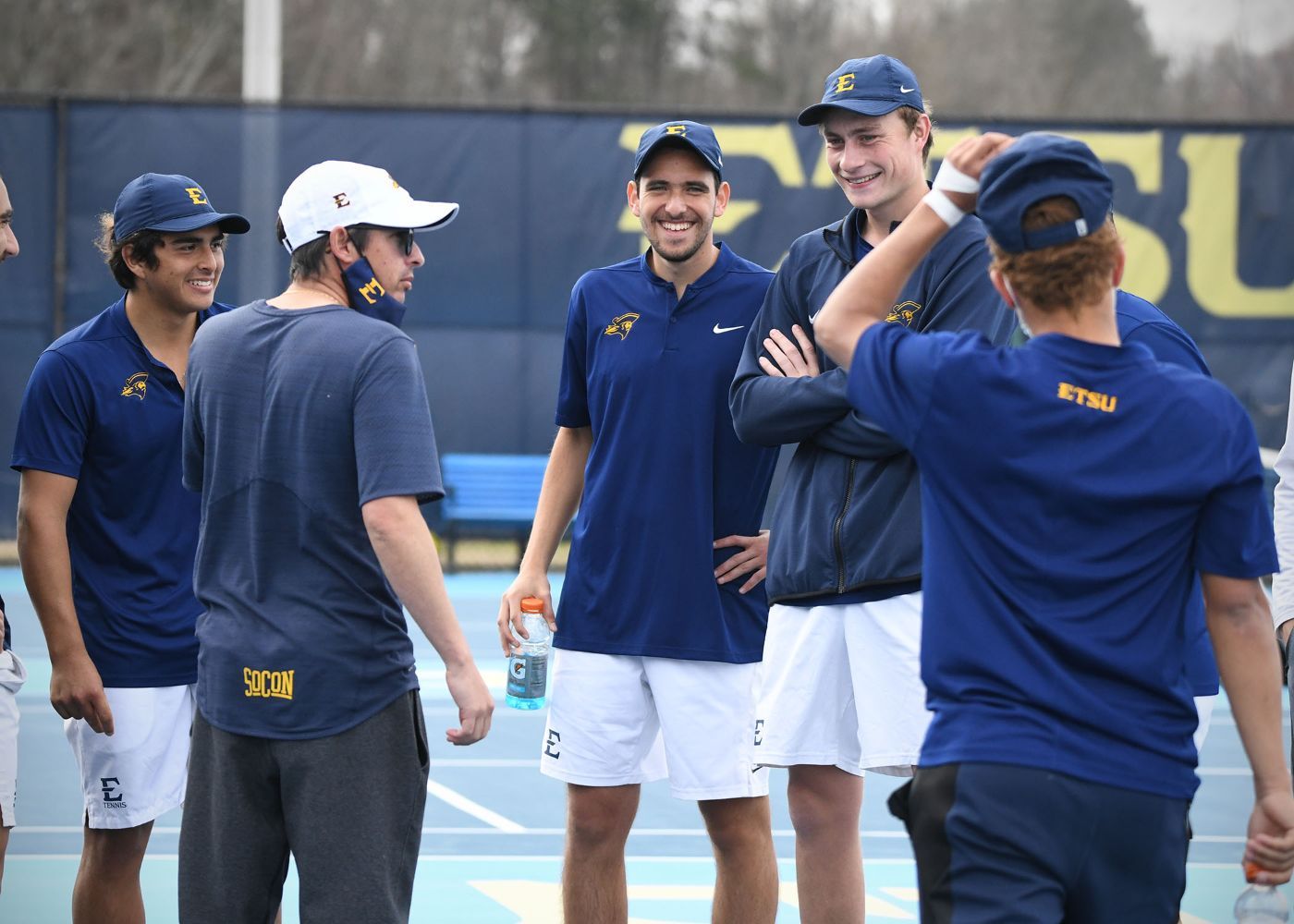 ETSU to take on pair of Georgia foes

ATLANTA, Ga. (March 18, 2021) – The ETSU Men’s Tennis team will put its four-match winning streak to another test this weekend as the Bucs head down to Georgia for a pair of matches. The Bucs (4-5, 2-0 SoCon) will begin the weekend with a noon match against Georgia State (5-5) on Friday in Atlanta, Ga. ETSU will then travel to Macon, Ga. to square off against Southern Conference competitor, Mercer (3-10, 1-0 SoCon).

About the Bucs
ETSU enters the weekend as the hottest team in the conference, winning four consecutive matches. The Bucs are coming off a 3-0 week in which they bested Radford in the home opener (4-3) on Tuesday, March 9, before traveling to the Carolinas to sweep Wofford (7-0) and down Charlotte (5-2).

Frazier Rengifo (Cali, Colombia) posted a dominating week in which he was named SoCon Men’s Tennis Player of the Week after earning six victories in six attempts. Rengifo finished 3-0 in singles play and 3-0 in doubles action, with two of his singles wins clinching a Buccaneer victory.

Dimitri Badra (Maracay, Venezuela) continues to hold the best record on the squad in singles play with a 6-3 mark, including 3-1 in the top spot. Rengifo is right behind Badra with a 5-4 record, having claimed four consecutive victories as the senior has returned to midseason form. Thiago Pernas (Buenos Aires, Argentina) has come on strong for the Bucs with a 4-4 record, as has freshman Juan Sebastian Zabala (Guayaquil, Ecuador) who has won two consecutive outings to climb to 3-2.

The Bucs have climbed over .500 in doubles play with a 14-11 mark, thanks in large part to a perfect 4-0 record from the tandem of Rengifo and Juan Lugo (Maracay, Venezuela).

Prowling the Panthers
Georgia State holds a 5-5 mark on the season, having won its most recent outing with a 5-2 win over Stetson. The Panthers are 2-0 this season against the SoCon, with wins over Mercer (7-0) and Furman (5-2). However, Georgia State dropped the season-opening match to Charlotte (4-2), a squad that the Bucs just bested.

The Panthers are led in singles play by Harvey Maughan with a 6-4 record, primarily doing his damage from the No. 5 spot. Vazha Shubladze is the anchor at the top of the lineup, recording a 5-4 mark in the top spot.

Georgia State has proven to be a strong doubles team with a 16-10 record, led by the tandems of Andrei Duarte/Roberts Grinvalds and Kevin Huynh/Harvey Maughan who each have five wins.

Mayhem in Macon
The Bears are off to a tough start on the season, holding a 3-10 record heading into this weekend’s battle. Mercer has dropped two its last two matches, albeit a 4-0 decision to Clemson during that span. The Bears are 1-0 in league play, fending off the Terriers by the score of 4-3 in Spartanburg, S.C.

Following the departure of Olivier Stuart, the Bears have struggled to find consistency atop the lineup. Mercer is 22-53 in singles play this spring with Hugo Lobo posting a 2-9 mark at the top spot. David Georgadze holds the best record for the Bears at 4-5.