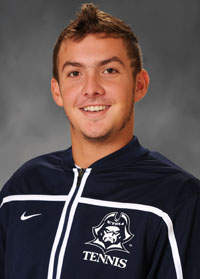 2011-12: Posted a 12-14 singles record, earning half of his wins in conference play with a 6-2 mark... was an even 10-10 in dual matches, recording a 4-3 record at No. 1 and 6-7 record at No. 2... combined for a 19-12 overall doubles record, seeing the most success (8-1) when paired with Rogerio Ribeiro... defeated UNF's Moritz Buerchner at No. 1 singles in the 2012 Atlantic Sun Tournament Championship Finals, clinching ETSU its sixth consecutive title... named Atlantic Sun Tournament MVP... earned A-Sun First Team Singles All-Conference honors... selected A-Sun Second Team Doubles All-Conference.

2009-10: Finished the season with a 15-13 overall singles record…Defeated Davy Sandgren of Tennessee in fall tournament play…Knocked off Viktor Maksimcuk of Louisville and Illia Ziamtsou of UNC Wilmington in spring action…Teamed up with Sander Gille to finish an impressive 25-6 in doubles play.

Prior to ETSU: Attended Colegio Tas Cumbres…Highly sought after southpaw recruit was ranked as the  No. 1 junior in Venezuela...Won the 2008 Panama Bowl…Also won the 2008 Horizontes de Anistad of Cuba…Earned the doubles title at the 2009 Copa del Café in Costa Rica.