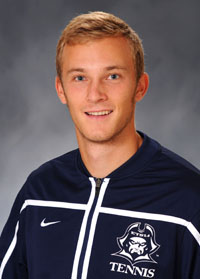 2008-09: Only Buc to go unbeaten during the season…Posted a 3-0 mark after having to sit out most of the fall and spring season…Went 2-0 at the No. 6 position, while earning one victory at No. 3…Saw action with teammate Daniel Isaza in two doubles contests…Went unbeaten with Isaza for a perfect 2-0 mark in doubles...Did not drop a set in A-Sun singles action, with wins over Lipscomb, Belmont and FGCU.

Prior to ETSU: Played for coach Gert Ramakers... had a career combine ITF ranking of 1351... defeated fellow countryman Karim Ahamd (6-2, 6-1) during play at the ITF Leewenbergh... helepd Belgium win the European Championships at the age of 14.