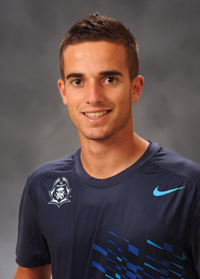 2011-12: Tallied an 18-9 overall singles record, including a 10-4 mark in dual matches and a 7-1 record in conference play... spent the majority of dual play in the No. 6 hole, boasting an 8-1 mark... ended the season on an eight-match singles winning streak... combined for a 6-8 doubles record, earning a victory at No. 1 doubles with Sander Gille against A-Sun foe FGCU... made his second NCAA Tournament appearance against Ohio State... named Second Team All-Atlantic Sun in singles... earned A-Sun All-Academic honors.

Prior to ETSU: Was ranked 140th in the men’s tennis rankings in Spain... was top-25 in Spain for under-18…Runner-up in the American International tournament under-23 in Spain in 2009…Runner-up in the Kid's Cup OUATT Under-16 in France... was ranked 295th in the European Tennis Rankings Under-16... advanced to the quarterfinals in doubles in the ITF Futures Spain F9 in 2010... helped Tennis Club Manresa to won the 3rd place on the Spanish Championship Division 3 on 2010.