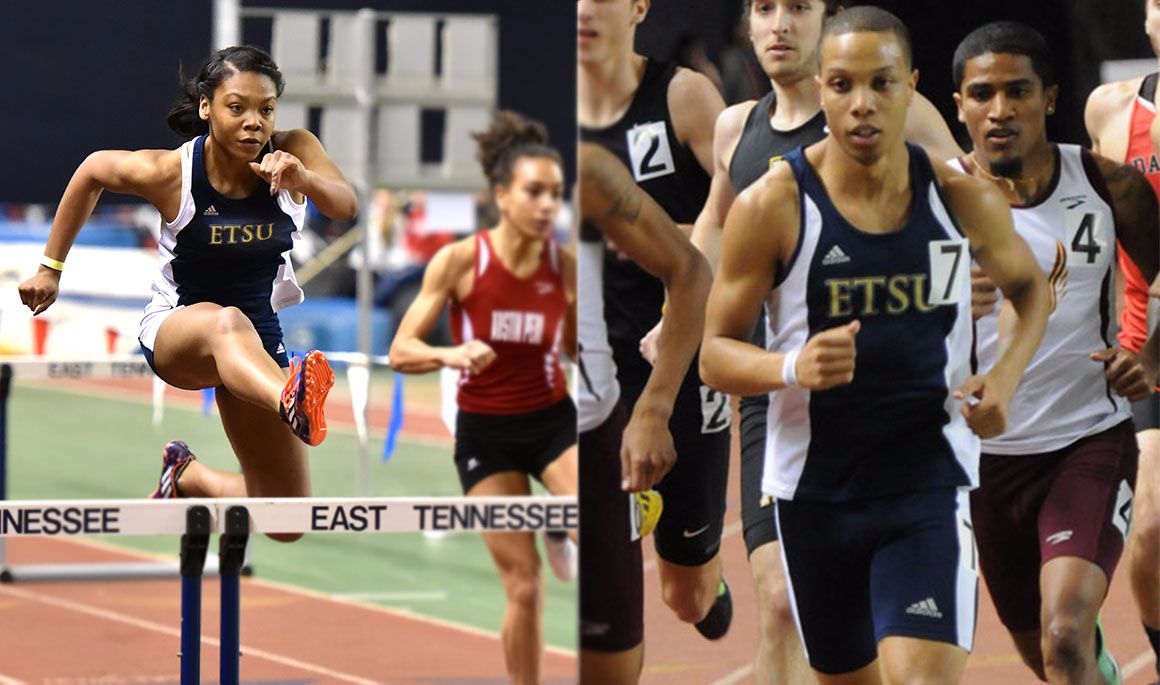 Both Kyra Atkins (left) and Thomas Miller (right) have times that are ranked top 25 in the NCAA East Region
Miller, Atkins Post Collegiate Bests at Florida Relays
Related Links
GAINESVIILE, Fla./HIGH POINT, N.C. (April 1, 2016) – The ETSU Track and Field program saw six runners record personal or seasonal bests on Day One of both the Florida Relays and VertKlasse Meeting Friday.
Headlining the outstanding day on Friday was freshman Kyra Atkins (Greer, S.C.) who improved on her Southern Conference best time in the 100-meter hurdles on Friday at the Florida Relays posting a collegiate best time of 13.58. The reigning SoCon Field Athlete of the Week was 0.16 seconds off the ETSU 100mH hurdle record set by DeDe Edgecombe last season. The mark gives Atkins the 11th fastest time in the 100mH in the NCAA East Region.
Also on the women's side, senior Keturah Williams (Alpharetta, Ga.) ran her best time of the outdoor season in the 100 meter, posting a mark of 11.95 at the Florida Relays.
Senior Thomas Miller (Lithonia, Ga.) notched a collegiate best time of 1:51.24 in the 800 meters at the Florida Relays to improve his already best time within the Southern Conference this season. Miller's mark moves him into the top 25 in the NCAA East Region in the men's 800 meters. In the 400 meter hurdles, junior Michael Williams (Mt.Laurel, N.J.) ran a personal best time of 51.61 to place 12th out of 53 runners. William's time gives him the fastest time in the 400 meter hurdles for the SoCon this season.
For the second straight week the Bucs split up the squad to head to the VertKlasse Meeting where ETSU saw two top-20 finishes and two personal best times.
In the men's shot put, junior Jacob Dunlap (Fulks Run, Va.) placed 20th after a throw of 14.06 meters (46-1.5"). The mark for Dunalp ranks sixth in the SoCon during the outdoor season.
On the track freshman Zackery Summerall (Sarasota, Fla.) finished 12th out of 98 runners in the 1500 meter with a collegiate best time of 4:00.78. The time gives Summerall the sixth fastest time in the 1500m during the outdoor season in the SoCon.
It was a successful showing on the women's side as well at the VertKlasse Meeting as sophomore Adrian Watkins (Kingsport, Tenn.) had her best performance of the outdoor season in the javelin, posting a mark of 25.23 meters (82-9.5").
Rounding out the day was the women's 1500 meter run where junior Victoria Hutchens (Stuart, Va.) placed 27th out of nearly 100 runners with a time of 4:54.76. Right behind Hutchens was sophomore Macy Carrier (Bluff City, Tenn.) in 31st with a time of 4:55.76.
Day Two of the Florida Relays begins tomorrow at 11:00 a.m. with the men's discus final while the VertKlasse Meeting kicks off at 9:00 a.m. with the women's 800 meter run.
For more information on Buccaneer Track and field, visit ETSUBucs.com and click on the track and field pages.