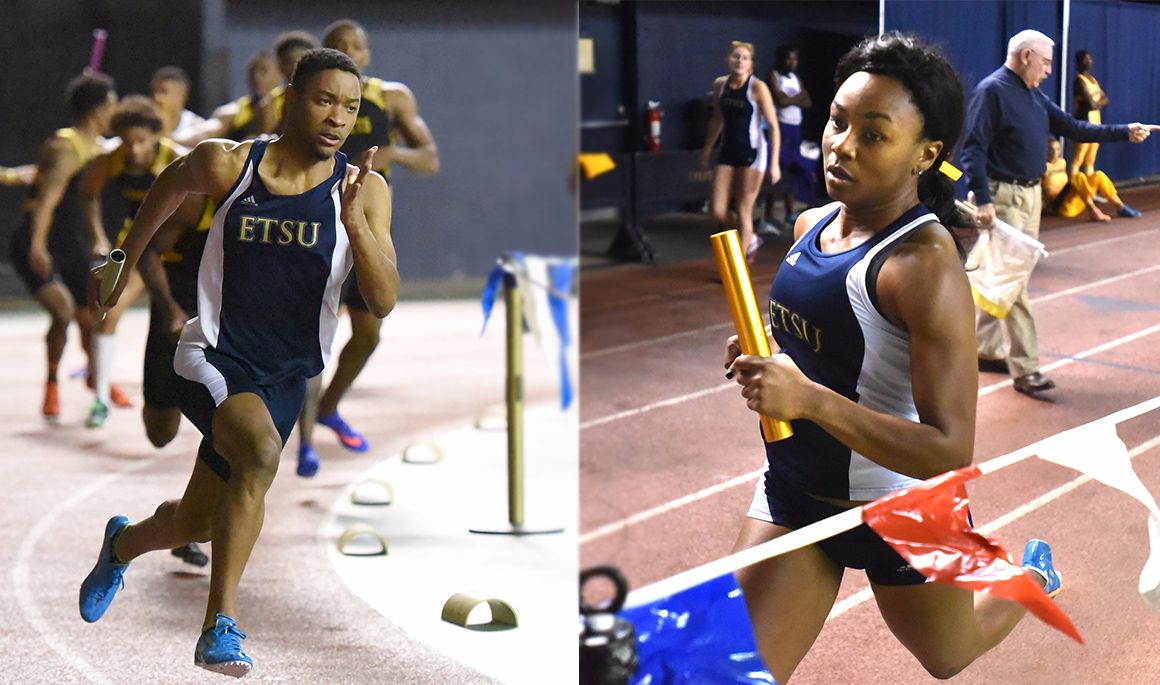 With 21 events scored, the men placed 2nd while the women placed 6th

CULLOWHEE, N.C. (April 16, 2016) – It was an excellent performance by the ETSU Track and Field program on the final day of the Benyon Sports Complex Catamount Classic as the Buccaneers had five event winners on Saturday in Cullowhee, N.C.
Overall with 21 events scored, the men's team recorded 132 points to finish second behind Southern Conference counterpart and host, Western Carolina. The women's squad totaled 64 points to finish sixth.
"I'm pleased with the overall team effort this weekend, " said track and field director George Watts. "We had some wins and personal and seasonal bests as it was very advantageous to compete at the site of the SoCon Championships."
The first victory of the day came in the men's 4x100 meter relay as the team of Matthew Moore, Patrick Taylor, A'Darrius Sanders and Jordan Scott recorded a time of 41.58 for the victory. That mark is the second fastest time in the SoCon this season.
ETSU swept the top three spots in the men's 3000 meter steeplechase as Simeon Roberts, Haydn Borghetti-Metz and Matthew Joyner finished 1-2-3, respectively. Roberts won the event with a time of 9:29.38 with Borghetti-Metz following in second with a time of 9:45.27. Joyner placed third with a mark of 9:47.19.
Another victory for the Bucs came in the men's 100 meter dash as Matthew Moore took home the top spot with a time of 10.76. In the field, Brett Squibbs earned his first victory of the season in pole vault with a season high mark of 5.00 meters.
The lone event victory for the women came in the 400 meter hurdles as Nicki Smith grabbed the top spot with a time of 1:03.01.
In the women's 100 meter dash, Keturah Williams placed second with a time of 11.77, coming just .12 seconds from tying her collegiate personal best. Freshman Kiana Davis recorded a top ten finish in the 100m finishing seventh while recording a personal best time of 12.06. Rounding out the top ten was freshman Starr Graham who also ran a personal best time of 12.30.
"We still have alot of work to do but I feel good about the mindset of both teams," said Watts.
ETSU will head to Atlanta, Ga. for the second time this season to compete in the Georgia Tech Invitational, April 22-23.
ETSU Highlights
- Men's 4x400m relay team of Michael Williams, Thomas Miller, A'Darrius Sanders and Ashton Wilson placed second with a seasonal best time of 3:17.97.
- Men's 5000m: David Winchester and Daniel Sonnenfelt placed in the top five as Winchester placed second with a time of 15:17.04 while Sonnenfeldt recorded a fourth place finish with a personal best time of 15:34.79.
- Women's 4x100m Relay: The team of  Keturah Williams, Kiana Davis, Starr Graham and Nyambi Shoates finished third with a time of 46.12, the fastest time for ETSU this season.
- Women's Pole Vault: Two Buccaneers finished in the top ten with senior Ashley Kessler (Knoxville, Tenn.) placing second with a mark of 3.50 meters. Right behind Kessler in fifth was junior Savvanah Bowne with a collegiate best mark of 3.20 meters.
For more information on Buccaneer Track and field, visit ETSUBucs.com and click on the track and field pages.