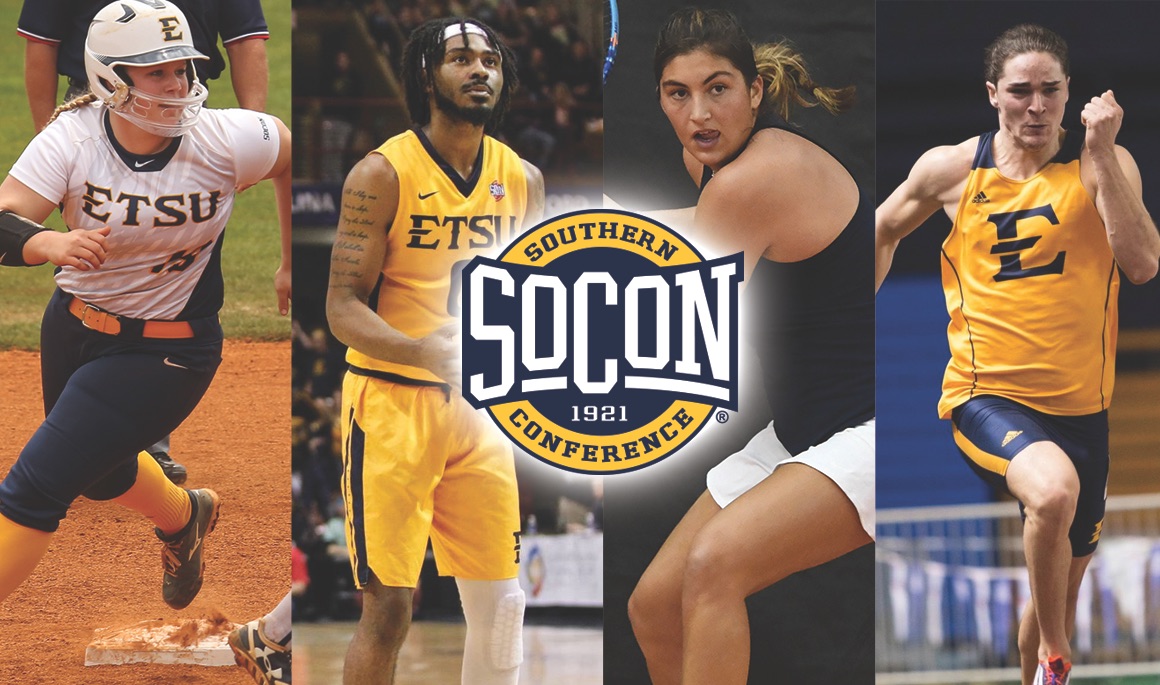 Four Buccaneer student-athletes earned Southern Conference Athlete of the Month honors as the league office announced its award winners for the month of February on Thursday. T.J. Cromer (Albany, Ga.), Marina Guinart (Castellar Del Valles, Spain), Tiffany Laughren (Erwin, Tenn.) and Nathan Rivera (Knoxville, Tenn.) all earned accolades, as ETSU had the most student-athletes represented on the list of Player of the Month for February. This marks the first time all four athletes earned the accolade.

T.J. Cromer led the Bucs to a 7-2 mark in February as ETSU finished the regular season 14-4 in the league to earn a share of the Southern Conference regular-season championship. Cromer averaged 20.3 points per game in February and added 4.0 assists per game and 3.2 rebounds per contest. The Albany, Georgia, native scored at least 20 points in four games, including a 32-point effort in a 93-81 win over Furman on Feb. 22. Cromer made 47 percent of his field goal attempts during the month, including 29-of-70 3-point attempts (.414), and connected on 93 percent of his free-throw attempts (26-of-28).

Tiffany Laughren led the Bucs to an 8-7 record for the month of February, leading the SoCon in batting average (.477) and doubles (7) and ranking second in hits (21), fourth in total bases (30) and fifth in runs scored (11) in 44 at-bats. The sophomore recorded six multi-hit and three multi-RBI games in addition to hitting safely in 12 of the Bucs’ 15 games, reaching base safely in 13 of the 15 games. Laughren also hit safely in the first five games of the season, including four multi-hit games during that stretch, while ending the month on a six-game hit streak. The Erwin, Tennessee, native set career highs with three-hit games against Gardner-Webb (Feb. 10) and Alabama A&M (Feb. 11 and 12) in addition to posting a career-high three doubles in the game against Gardner-Webb. Laughren recorded her first collegiate triple in the Bucs’ 11-0 rout over North Carolina Central on Feb. 26 and scored at least one run in the first five games of the season and in nine of the 15 ETSU games for the month. Laughren was named the SoCon Player of the Week on Feb. 17.

Marina Guinart continued her unbeaten streak in singles play during the month of February. She was a perfect 5-0 at No. 2 singles to start the season 8-0. Guinart has not dropped a singles match in her career and is 27-0 in singles play at ETSU. Four of her five victories came in straight sets. The Castellar Del Valles, Spain, native teamed with Ioanna Markesini (Athens, Greece) at No. 1 doubles and went 4-1 during the month. Their lone loss of the month came via a 6-3 decision to NC State’s Anna Rogers and Martina Frantova, but Guinart and Markesini rebounded to top Murray State’s Claire Change and Alina Schibol (7-5) before downing Winthrop’s Lauren Proctor and Megan Kauffman (6-4).

Nathan Rivera accounted for 20 of the Bucs’ 137 points on the men’s side at the SoCon Indoor Track & Field Championships. The senior won the men’s heptathlon with a score of 5,041 points, surpassing his seed of 3,591 points by nearly 1,500 points. Rivera swept the first four heptathlon events on the first day of competition, which consisted of the 60-meter dash, long jump, shot put and high jump events. The Knoxville, Tennessee, native also placed third in the men’s long jump at the championship meet with a distance of 7.00 meters (22 feet, 11.75 inches). Rivera also placed sixth in the men’s high jump with a height of 1.90 meters (6-02.75) and eighth in the 60-meter hurdles (8.76), gaining an additional four points for the Bucs, who placed third overall in the championship meet.