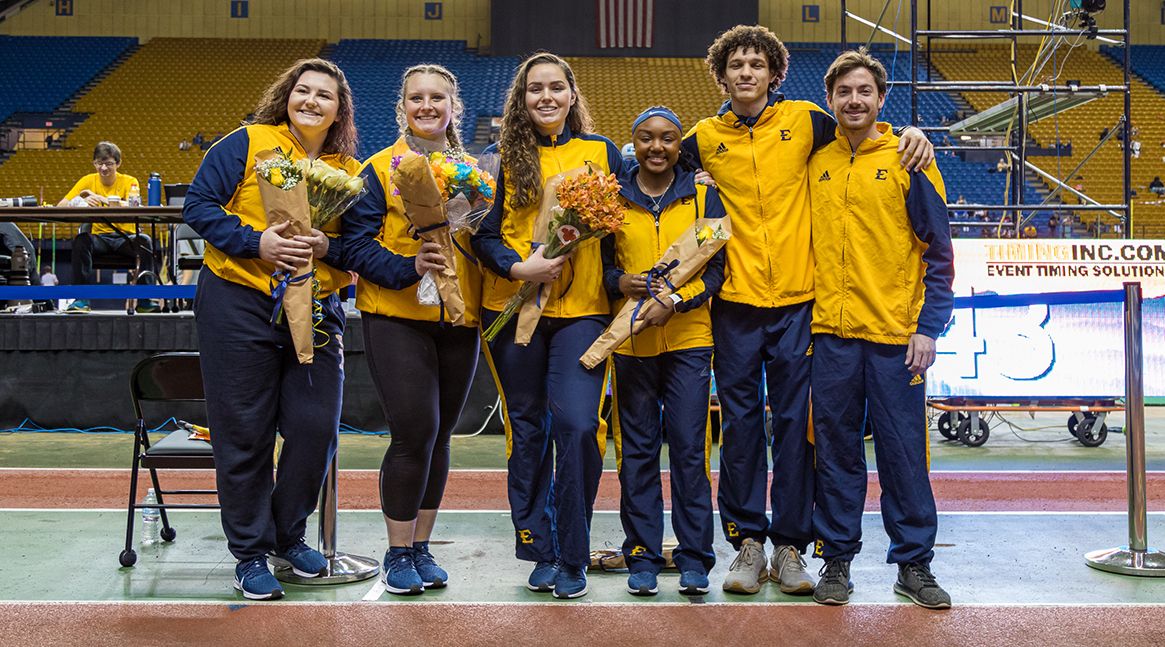 Wilson, Feuchtenberger, Stallworth, Parrilla and Johnson all earn top marks on day two of the Buccaneer Track and Field Invitational

JOHNSON CITY, Tenn. (Feb. 1, 2020) – In a day for honoring the work and dedication put in by six seniors, the ETSU Track and Field team scored six golds on the day’s events, five of them coming in the track portion of the meet inside the MSHA/ETSU Athletic Center on Saturday.

Lindsey Stallworth got the Bucs off to winning ways on the track in the mile, while Jataya Wilson found the solo gold in field events for ETSU by way of the shot put. Following suit, Heather Feuchtenberger, Miguel Parrilla and Kennedi Johnson grabbed first in back-to-back-to-back events, Feuchtenberger and Parrilla edging out the competition in the 800m before Johnson continuing her prowess in the 60m hurdles with a gold finish.

Off the field, there was plenty of reasons to celebrate as well. During an intermission in the early afternoon, ETSU Director of Track and Field George Watts took advantage of the lull to celebrate six seniors: Sydney Hawks, Jaden Finch, Margaret Hayden, Neyasha Honorable, Noah Charles and Ben O’Connor (pictured in the header).

“I really enjoy our senior recognition event as I think it's one of the best things we do each year at this meet,” said Coach Watts. “ I know the parents and family who attend are as proud of their daughter’s and son’s academic achievements as they are of their athletic successes. We really try to recognize both accomplishments during this moment. It was great to have our Athletic Director Scott Carter there to be a part of this event to help recognize our senior class. Topping it off was senior Sydney Hawks singing the National Anthem before the beginning of the running event finals.”

Athlete of the Meet Awards:

Wickham finished the 60m dash with a time of 7.28s, shattering the previous meet record of 7.45s set by Ornelia Livingston of St. Augustine in 2016. Her semis time of 7.31s also broke past Livingston’s mark.

Vance leaped for a mark of 6.01m in the long jump, a mark that holds for the third best jump in the event history. Shakinah Brooks of St. Augustine holds the record from her 2015 jump of 6.23m.

With a launch of 17.16m, Knauer’s shot put toss put him nearly .60m further than the closest competitor, giving him comfortable gold in the event. The toss cleared him all the way to third in event history at the Buccaneer Invitational, behind a 18.58m toss from Mitchell Pope (Unattached, 2016) and a 17.33m throw from Nathan Milch (Appalachian State, 2017).

On the meet as a whole: “We had a really good meet, with great atmosphere and support throughout the two days. Yesterday we had some breakthrough performances in the sprints, hurdles, throws and DMR's and it carried over to today's events. Our kids are learning how to make finals, get on the podium and/or compete for the win.”

On the help of the officiating crew: “As always I want to thank our great officiating crew as they performed to their usual high standards. Larry Manis has done a fantastic job organizing and lining up our officials for our home meets. I really appreciate his support as well as the other alum and those who come from out of town to work our meets.”

On support from ETSU: “I know we had quite a few parents in the stands in support of their son or daughter and I appreciate them being in attendance. I also want to thank Dr. Noland for taking some time to come by and show his support of our great sport of track and field.”

On what lies ahead: “We will send a small group of athletes to the Camel City Classic in Winston-Salem next weekend and then have a final tune-up a week later as we prepare for the Southern Conference Championship.”