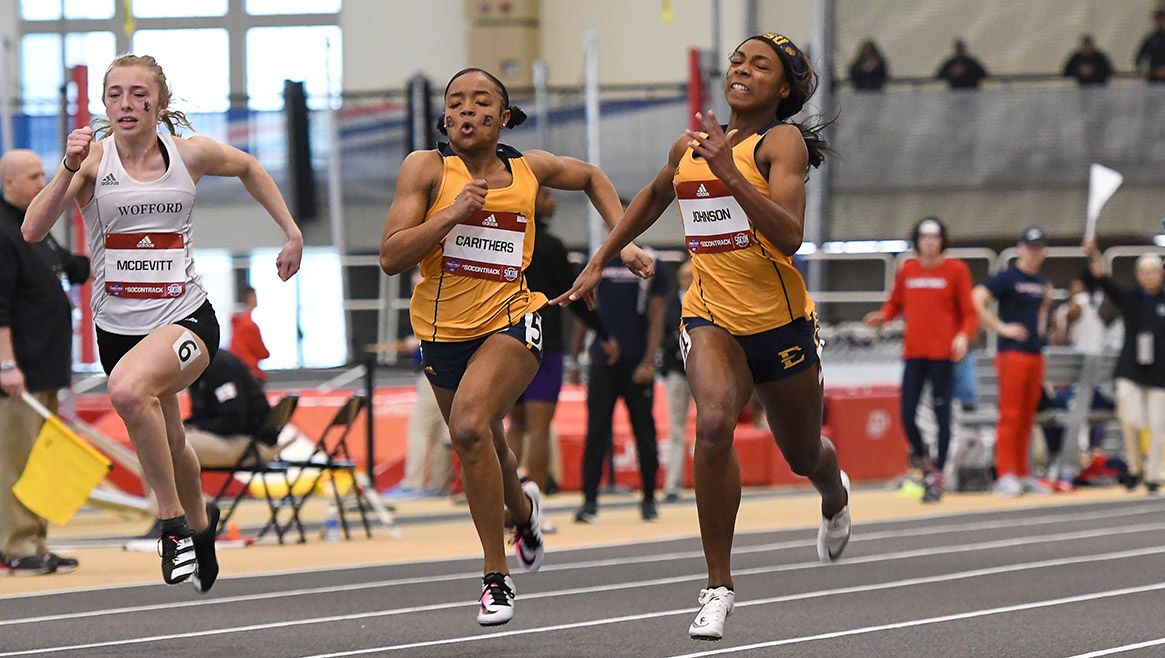 LEXINGTON, Va. (Mar. 1, 2020) – As the month leaped to March, the ETSU Track and Field Team also made a significant leap, led by the women who surged all the way to a second-place finish at the Southern Conference Indoor Championships at the VMI Corps Physical Training Facility on Sunday.

Entering the second day in a spot for fourth place, the women found early momentum in the triple jump, earning 23 points between four Bucs to leap frog the standings into second place with the majority of the day ahead of them. After conceding the silver spot to Wofford, the Bucs made another push in the 60m sprint to get the top three places and distance themselves from the Terriers on their way to a second-place finish.

Mekayla Brown’s leapt her way into the record books, setting a facility and personal best 12.63m on her fifth attempt, not needing her last effort to grab gold in the triple jump.

Nicole Johnson also set records, beating her previous best while setting the conference record held for 15 years by .03 seconds, finishing the 60m in a time of 7.40s.

The men saw some bright spots over the course of the day, but were unable to garnish enough momentum to rise up the leaderboards. The Bucs scored 18 points on day two, placing seventh with a combined 34 points in the two days. Despite the finish as a team, the men were able to set 13 new personal records on the weekend, trying to swing momentum into the outdoor campaign.

Field Highlights from Day Two of the SoCon Indoor Championships:

Track Highlights from Day Two of the SoCon Indoor Championships:

On the women’s second place finish – “Our women had a very good meet over the past two days and I feel we’ve turned the corner a little bit this indoor season.”

On the overall performance – “We had ten podium finishes and we need to continue to get more every meet. In a way I was more impressed by the fact that 22 of the 25 women we took found a way to score. Obviously, that translates into a good team score."

On the men’s performance – “Our men had a rough one partly due to the limited squad size and to a lesser extent injuries. I thought the guys competed hard, we just didn’t have enough bodies to be in position to score. I look forward to our men’s team making progress during the outdoor season.”