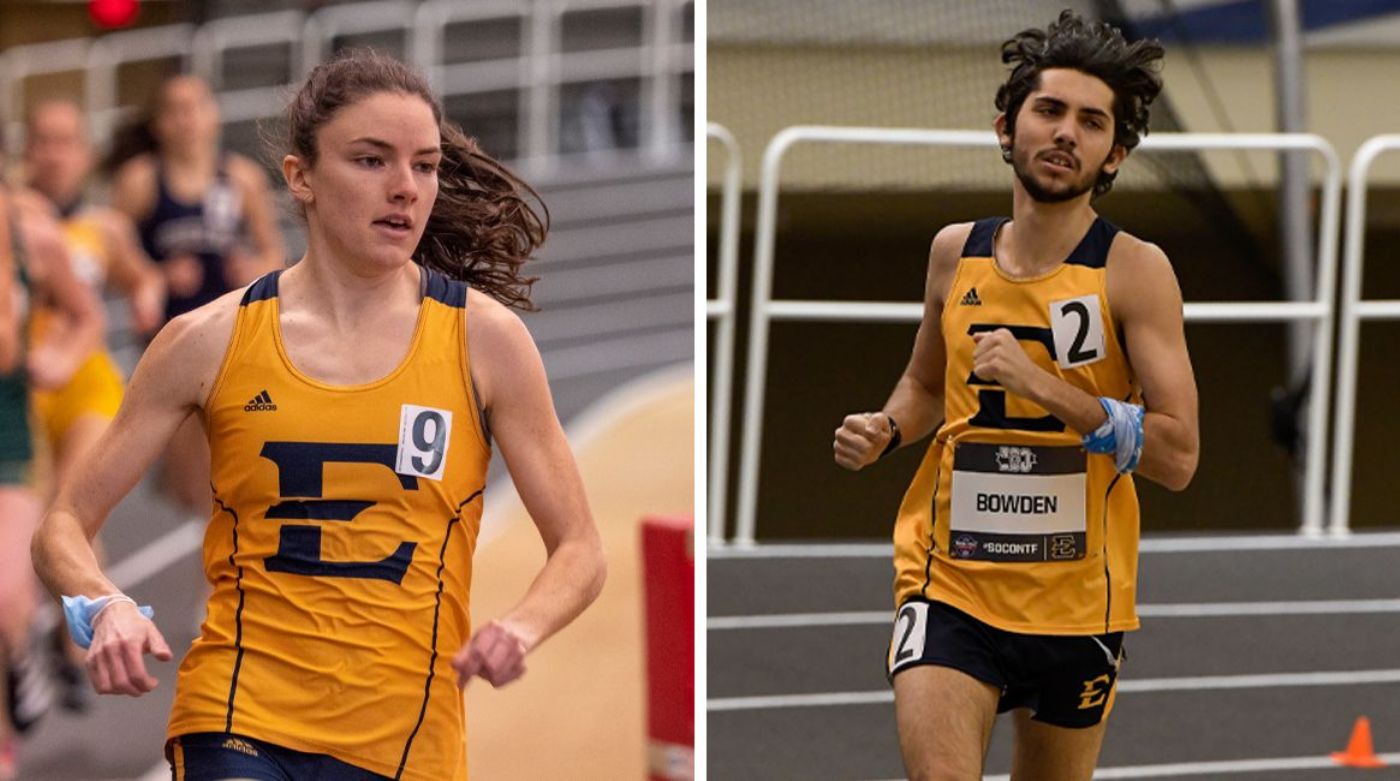 Cullowhee, N.C. (April 16, 2021) – It was a day of records being broken for the ETSU track and field team as the squad combined for almost two dozen personal records, three individual gold medals and a new meet record in the men’s 5000m.

In one of the busiest meets of the outdoor season for the Blue and Gold, the Bucs geared up for the conference championship less than two weeks out at the Catamount Athletic Complex, taking advantage of gaining a feel of the ground that will host them in just a short time. Noah Shelton (Gray, Tenn.) and Lindsey Stallworth (Knoxville, Tenn.) both tallied a top finish in the men’s javelin and women’s 1500m run, while Seth Bowden (Maryville, Tenn.) set a new meet record on his way to a first place finish in the final race of the evening in the men’s 5000m run.

The meet opened with the women’s 100m hurdles, seeing a trio of Buccaneers perform in the debut event of the Catamount Classic. Lindsay Cooper (Charlotte, N.C.) qualified in the prelims with a time of 14.05s, just .04s off of the top time to advance to tomorrow’s finals with her fastest time of her young collegiate career. The freshman will be joined by Kennedi Johnson (Nashville, Tenn.), who also secured a personal record with her time of 15.02s to place 6th. Britney Griffith (Kingsport, Tenn.) finished just behind her best pace with a time of 17.85s as the Bucs grabbed a strong start in the day’s competition.

Competing in back-to-back events, Cooper wrapped up her performance in the hurdles to immediately head to the 200m dash, once again finishing under a tenth of a second off the top time to secure a trip to the finals with a 24.53s, second place finish. Kennedie Carithers (Dacula, Ga.) joins the freshman after her 25.22s performance for sixth, while Johnaida Eliscar (Columbia, S.C.) just missed out on a qualifying time with her 25.81s effort. Cooper and Eliscar both set personal bests in their individual races, making it two-in-two for Cooper for breaking personal records.

Atlantis Warren (Memphis, Tenn.) saved her best for last in the hammer throw, launching a personal best toss of 46.52m on her sixth attempt of the afternoon for a second place finish in the event. Warren’ toss proved just four inches off of the leader, narrowly missing out on the top mark. Mary Brown (Radford, Va.) placed fifth with a final toss of 45.13m, while Anna Moore (Knoxville, Tenn.) also recorded a new personal record on her last throw of the event. Moore’s launch of 39.63m overtook her previous record of 36.38m set at the 49er Classic in the middle of March.

Securing the first gold mark of the day, Noah Shelton claimed honors in the javelin throw. On his second heave, the sophomore recorded a distance of 52.52m, edging out the trailing Brett Lemmons by just under a foot of separation. Shelton set his previous record in the event two years ago at this same event, also securing first place with a throw of 49.01m.

With a Buccaneer quad competing in the women’s long jump, Molly Rhudy (Chilhowie, Va.) paced the side with a fourth place leap of 5.50m. Recording it in her first jump of the afternoon, Rhudy finished just .03m off her previous best at the SoCon Indoor Championships. Griffith and Johnson finished sitting just outside a placement spot, their leaps of 5.21m and 5.16m proving good for 9th and 11th. Griffith vastly improved on her previous best leap, tying for ninth place in distance while finishing just .03m off the final scoring spot. Patra Williams (Lithonia, Ga.) made her debut in the event with a leap of 4.87m.

Back on the track, Isaiah Mills (Freeport, Fla.) was the lone competitor for ETSU in the men’s 200m prelims. The freshman finished just outside of a qualifying spot, but marked a new collegiate best for the young Buccaneer with a 22.14s finish.

With a fourth place finish in the pole vault, freshman Caitlyn Cutshall (Kingsport, Tenn.) improved on her previous best mark in the event. Cutshall’s second effort at 3.05m cleared the bar, bettering her previous tally of 2.80m that the rookie scored on multiple occasions.

Wrapping up the day’s field events Malachi Thomas (Chilhowie, Va.) made his collegiate debut in the men’s long jump. The freshman leapt to a 6.41m distance on his third attempt, putting him in scoring position at 8th.

As events started winding down for Friday, the Buccaneers hosted a party in the women’s 1500m race. Seven members of the Blue and Gold crossed the line in the event, including five inside the top half of the field. Led by the first place finish from Lindsey Stallworth, the junior grabbed her fourth gold of the 2021 Indoor and Outdoor season with a time of 4:30.29. Kiera Snyder (Clyde, Mich.) finished shortly behind her teammate for a third place finish of 4:45.66, good for a personal record. The trio of Makayla Shaw (Jonesborough, Tenn.), Rebekah Howard (Ashland, Ky.) and Lindsay Holliday (Maryville, Tenn.) finished 9th-10th-11th, only six seconds separating the three times. Howard marked a personal best finish with a time of 4:57.02

Seth Bowden closed the day’s events at the Catamount Classic in the men’s 5000m, setting a new meet record with his time of 14:43.39. The time also marked the junior’s quickest finish in the event, taking more than 10 seconds off his previous best. Josh Krafsur (Fort Collins, Colo.) made his debut in the event with a sixth place finish that saw the sophomore cross the line in 15:16.49, while freshman Jordan Thomas (Knoxville, Tenn.) flirted with his best time but fell just short with a finish of 15:40.26.

In the only two events the Bucs will run at the Virginia Challenge, Matthew Scarr (Wamberal, NSW, Australia) secured a finish in the top third of the field with a personal best time of 13.59.90 in the 5000m run while Phelani Maduwa (Parys, Free State, South Africa) finished the 1500m run in 3:56.12.

The Bucs conclude their action at the Catamount Classic on Saturday, opening the day with the men’s shot put, the women’s discus and high jump and the men’s triple jump, all starting at noon.