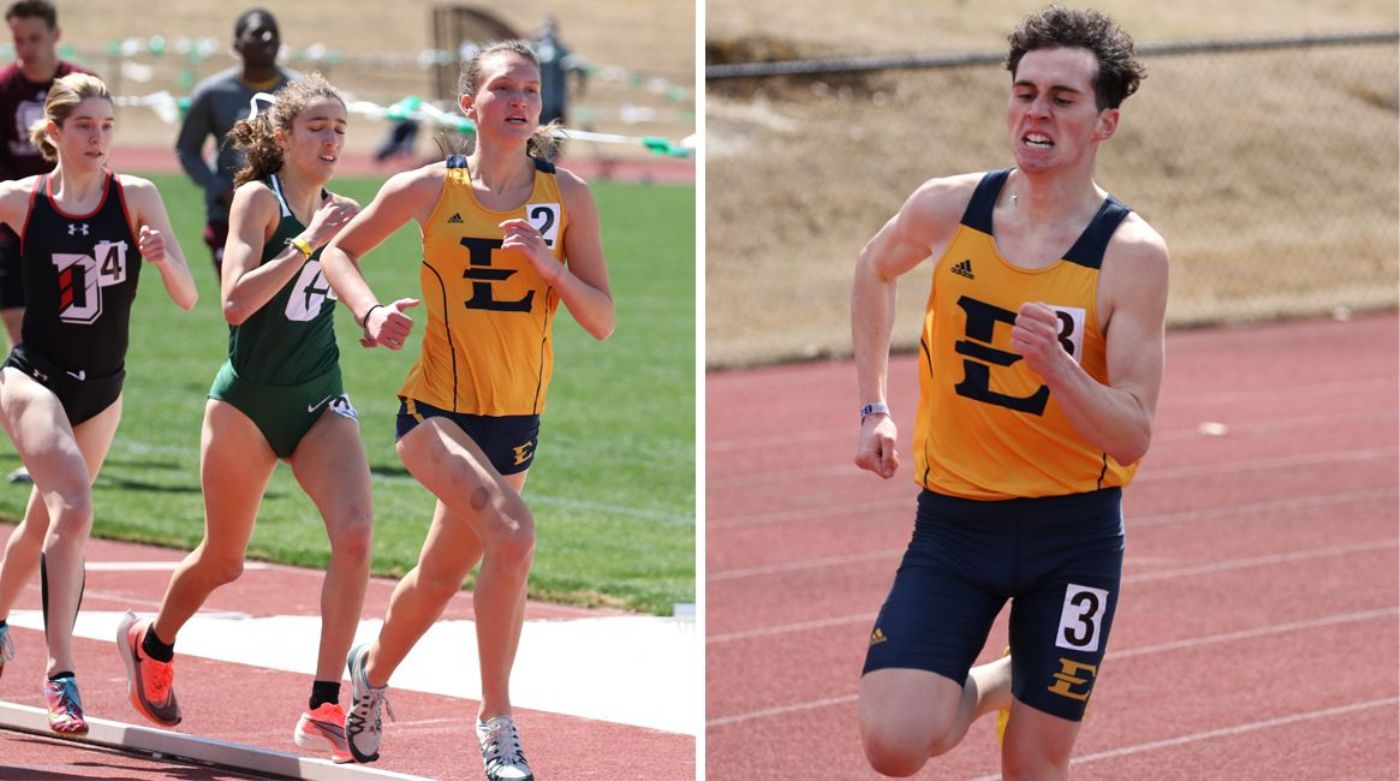 Cullowhee, N.C. (April 17, 2021) – In the final day of the Catamount Classic, the ETSU track and field team produced some performances on Saturday to build on as the Bucs head into a two week hiatus before competing in the SoCon Outdoor Championships.

The Bucs doubled their gold medals on the weekend after securing three in yesterday’s action. Three more were grabbed today, led by Lindsay Cooper (Charlotte, N.C.), Genevieve Schwarz (Oak Ridge, Tenn.) and Evan Guzman (Franklin, Tenn.). Using the strong day’s performances, the Bucs launched up the leaderboards on the women’s side, tallying the most points on the weekend in a field that consisted of four SoCon teams. ETSU’s 158 points from the women beat out Wofford (142) and Western Carolina (139.5) who finished second and third respectively. The men also competed hard with their small contingency who made the trip, scoring 61 points for a fifth place finish.

"We had a solid weekend of competition with several personal bests and podium finishes," said Director of Track and Field George Watts. "I was very pleased to see some improvement from some people and others finally getting a chance to compete as we close in on the conference championship."

Opening the day’s events with the women’s 4x100m relay, the Bucs picked up where they left off yesterday. The team of Lindsay Cooper, Molly Rhudy (Chilhowie, Va.), Kennedie Carithers (Dacula, Ga.) and LaNaya Martin (Columbia, S.C.) finished a second off the top time, securing a second place finish of 47.73s to get the Blue and Gold rolling.

After trailing the lead spot in the prelims of the 100m dash by .04s, Cooper competed in back-to-back events to start Saturday’s meet with the 100m finals. Agonizingly, the freshman settled for second place after posting a 14.30s time, just .01s off the leader. The top three of the event posted times within .05s of each other. Kennedi Johnson (Nashville, Tenn.) placed eighth with a 16.08s time.

After a Buccaneer trio posted 8th-9th-10th in the men’s shot put, the Blue and Gold posted four participants in the women’s discus. Mary Brown (Radford, Va.) led the group with a third place finish, her fourth toss of 39.97m proving just shy of her previous best. Atlantis Warren (Memphis, Tenn.) followed suit with a fourth place toss, her fourth effort covering a distance of 37.18m. Alyssa Ceja-Pena (Salinas, Calif.) finished sixth, making a debut in the event with a toss of 33.37m.

In the first jumps of the day, Patra Williams (Lithonia, Ga.) and Paige Peterson (Alpharetta, Ga.) finished with leaps of 1.45m on the high jump. On the men’s side, Marcus Evans (Snellville, Ga.) made his outdoor debut with a jump of 13.02m in the triple jump. Evans was just .10m off his career best in the event.

Cooper got her first place finish that evaded her, topping the group in the women’s 400m dash. The rookie took nearly a second and a half off her time, pacing the pack with her finish of 55.91s. Teammate Jessica Lord (Morristown, Tenn.) secured a 56.91s finish for a third place finish of her own. Johnaida Eliscar (Columbia, S.C.) took .04s off her fastest time for a 57.94s, fifth place finish while Britney Griffith (Kingsport, Tenn.) proved the fourth Buc to finish in a placement spot, finishing seventh with a time of 58.31s.

Carithers produced a bronze effort in the women’s 100m dash, finishing with a time of 12.29s. The freshman’s time proved just .002s off of second and under two tenths off first. LaNaya Martin marked her collegiate outdoor individual career in the event, placing seventh with a time of 12.47s.

Isaiah Mills (Freeport, Fla.) finished his first event in the 100m dash, placing 11th with a time of 11.30s as the lone participant in the event for the Blue and Gold.

Six Buccaneers led the charge in the women’s 800m run. The Bucs grabbed their second win of the day, Genevieve Schwarz racing to a 2:13.20 finish. The sophomore finished just .21s off her collegiate best time. Heather Feuchtenberger (Elizabethton, Tenn.) and Colbie Williamson (Clyde, N.C.) finished just over a second off each other’s pace for a third and fourth place result, respectively. Williamson set a new personal best with a 2:17.29 time, just behind Feuchtenberger’s 2:16.16 finish. Rebekah Howard (Ashland, Ky.) finished her first race in the event with a time of 2:23.80, Shila Kapaya (Knoxville, Tenn.) also debuting in the event with her 2:25.42.

Evan Guzman grabbed the second win of the day in the 800m, matching Schwarz with a first place position of his own. The freshman beat his personal record of 1:53.83 by just .02s, his 1:53.81 finish almost two seconds better than his nearest competitor.

Griffith and Eliscar competed for the Bucs in the women’s 400m hurdles, grabbing a fourth and fifth place finish, respectively. Griffith found herself just outside a top three finish, her 1:04.23 time less than two tenths off a third place mark. Eliscar followed behind, scoring a mark of 1:05.58. Griffith set a new personal record with her mark, while Eliscar made her debut with her performance.

Warren produced a toss of 11.66m in her second event of the day, proving enough for a fourth place finish. Brown finished just out of the scoring position, tossing for a 10.22m mark.

For the second straight meet, Spencer Fejeran (Tazewell, Tenn.) produced a record toss in the discus throw. After setting a mark at the VertKlasse Meeting earlier this month, Fejeran produced an effort of 37.63m for a sixth place finish to pace a trio of throwers for ETSU.

As the sole competitor in the women’s long jump, Peterson completed her day with a leap of 11.54m. Using her sixth and final jump to her advantage, the senior grabbed a fifth place finish with the jump.

Malachi Thomas (Chilhowie, Va.) finished the day’s field events in the men’s high jump. In his second collegiate meet, the rookie produced a seasonal best with a 1.95m launch for a second place finish.

In the finals of the women’s 200m, Carithers grabbed yet another podium finish for the Blue and Gold with her finish of 25.43s. The time proved just a second off a top place finish.

The final individual race of the event was the men’s 3000m steeplechase, where Dylan Zeller (Hixson, Tenn.) was the lone racer for the Bucs in the event. The freshman bested his previous time by 12 seconds, securing a 10:07.40 time with less than five seconds from catching the leader.

With the women’s 4x400m the last event on the cards, the women ended the day for ETSU on a high with a second place finish. Hannah Burkhart (Knoxville, Tenn.), Cooper, Williamson and Schwarz paced their way to a finish of 3:59.25 seconds.

"Our women's team is still not a full strength and won't be until the conference championship," said Watts. "Some of our top athletes have yet to compete this outdoor season so we still have question marks which won't be answered until the completion of the championship. In the future I hope we return to the traditional conference weekend that just about everyone in the country competes on to give our kids a chance to get an extra competition in or recover from injury or sickness."

The Bucs now prepare for the SoCon Outdoor Championships, set up to be hosted in the same spot they competed this week at the Catamount Athletic Complex. The Blue and Gold take the week off in preparation for the event to be hosted on May 1-2.

On what stood out this weekend - "The people who stood out to me the most at the Catamount Classic were Lindsay Cooper, Johnaida Eliscar, Britney Griffith, Jessica Lord, Genevieve Schwarz, Lindsey Stallworth and Atlantis Warren on the women's side and Seth Bowden, Evan Guzman, Noah Shelton and Malachi Thomas on the men's side. Furthermore, we had a lot of good performances from people that you could say went unnoticed, but nevertheless are significant improvements and strengthens our teams."

On fighting for a spot in the regionals - "We have several kids who have a chance to qualify for the NCAA Regionals and so we will have quite a few who will compete after the conference championships in the hopes of securing a spot at the regional meet."