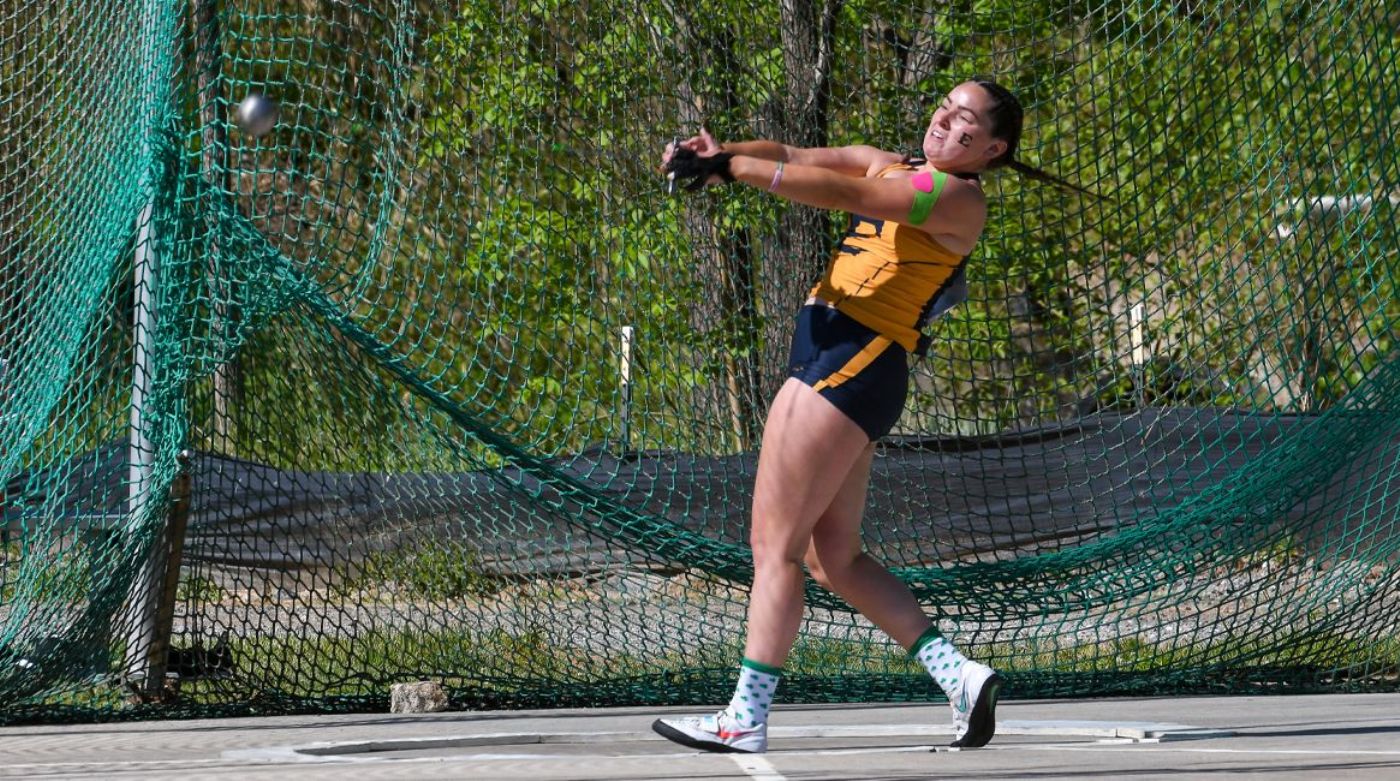 Margaret Hayden records a 54.40m launch in the hammer throw to break her previous record

CULLOWHEE, N.C. (May 1, 2021) – The ETSU track and field team finished their opening day at the Southern Conference Outdoor Track and Field Championships on Saturday afternoon on the campus of Western Carolina, earning 16 personal records and setting a school record inside the Catamount Athletic Complex.

The highlight of the day came early in the competition, the Bucs finding a new school record in their first competition on the women’s side of action. Margaret Hayden (Ballymore Eustace, Kildare, Ireland), after breaking an 11 year old school record back at the 49er Classic in the middle of March, once again eclipsed the program record by shattering her old toss of 50.40m, heaving her third toss of the day 54.30m on her way to breaking her own record.

Both the men and women’s teams gathered a late surge on the day after preliminaries covered the majority of the day. With results in the women’s long jump, the Bucs catapulted to a second place finish to end the opening day of competition, while nine points in the final two men’s events puts them in sixth with Sunday’s busy schedule looming.

Opening the weekend up for the Bucs was Jordan Thomas (Knoxville, Tenn.) and Seth Bowden (Maryville, Tenn.) in the men’s 10,000m. Thomas finished with a time of 34:06.32 in his first time in the event, finishing just outside a placement finish. Bowden grabbed the first point for the men’s side, placing eighth with his new personal best of 31:24.73.

“Seth Bowden grabbed an eighth place finish in his second 10k ever running a 16-second personal best,” said Director of Track and Field George Watts. “He's found a way to score in his two 10k conference meets and I feel he has a chance to continue that trend in the future.”

The women got their first points in their first event of the day as well, scoring 10 points in the women’s hammer throw. Hayden led the pack of five throwers with a toss of 54.30m in her third attempt for a fourth place finish. The toss bettered her previous mark of 50.40m she set earlier this season to capture the school record, obliterating that mark in the conference championship by nearly four meters. Mary Brown (Radford, Va.) also set a personal best, topping her old mark with a 48.27m effort to grab sixth in the event. Atlantis Warren (Memphis, Tenn.) rounded out the scoring with a seventh place, 45.64m toss. Alyssa Ceja-Pena (Salinas, Calif.) and Anna Moore (Knoxville, Tenn.) both produced personal bests in the event with 43.00m and 41.21m tosses, respectively, just falling outside of scoring positions.

“I'm very proud of our throwers as they produced points and personal bests in the hammer and javelin,” continued Watts. “Margaret Hayden led the way with her fourth-place finish and breaking her school record by almost four meters. That is a significant improvement and she did so in the most important meet of the season. Mary Brown scored in both throws with personal best marks finishing sixth in the hammer and seventh in the javelin.  Senior Atlantis Warren picked up a seventh in the hammer and Alyssa Ceja-Pena and Anna Moore came through with lifetime bests as well. It was a good day for the group.”

In the first track event of the day for the women, the Bucs narrowly missed out on a qualifying time for tomorrow’s 400m finals. Johnaida Eliscar (Columbia, S.C.) finished with her personal best time of 57.80s, less than three tenths off of a place in tomorrow’s championships. On the men’s side, Isaiah Mills (Freeport, Fla.) also just missed out on a spot in the finals, the freshman finishing 9th with a time of 49.68s.

In the women’s 100m dash, LaNaya Martin (Columbia, S.C.) finished just .01s off a qualifying spot, finishing just shy of a spot for tomorrow’s finals. Despite the heartbreak, the freshman took nearly three tenths of a second off her previous best time with a 12.22s. Fighting off an injury that kept her out the entire outdoor season, freshman Nicole Johnson (Chattanooga, Tenn.) ran a 12.50s time in her season debut. Molly Rhudy (Chilhowie, Va.) and Neyasha Honorable (Knoxville, Tenn.) also made their debuts in the event, marking times of 12.72s and 12.73s each.

On the men’s side, Kyle Noe (Maryville, Tenn.) set his personal record in the 100m dash, but the time of 11.69s proved not enough to get him through to the finals.

The Bucs grabbed three spots in the women’s 800m finals nearing the midway point of the afternoon. Jessica Lord (Morristown, Tenn.) led the Blue and Gold to a fourth place finish in the event, her time of 2:12.69s the second quickest time in her heat and overall. The two other winners of the final two heats dropped her rank into tomorrow’s finals to fourth, where she will be joined by teammates Julia Karsten (Old Hickory, Tenn.) and Colbie Williamson (Clyde, N.C.). Karsten’s time of 2:16.42 puts her in sixth entering tomorrow, while Williamson edged out teammate Heather Feuchtenberger (Elizabethton, Tenn.) for the final spot with her time of 2:17.72, Feuchtenberger settling for ninth just two hundredths off Williamson’s time.

The Bucs grabbed two points in the women’s javelin throw through Brown. The junior tossed the javelin 33.40m for a collegiate best on her fourth toss, placing seventh and adding to the tally for her team.

In the men’s 800m, a trio of Bucs moved on to the finals. Phelani Maduwa (Parys, Free State, South Africa) posted the best mark for the Blue and Gold with a time of 1:53.53. Miguel Parrilla (Knoxville, Tenn.) finished with the top mark in the third section, earning a third seed in the finals with a 1:54.55 finish. Evan Guzman (Franklin, Tenn.) ended his evening with a personal record of 1:53.57 to take a fifth place finish in the prelims, giving the Bucs three scoring opportunities tomorrow.

Britney Griffith (Kingsport, Tenn.) took the top spot in the prelims of the 400m hurdles for the Bucs, finishing with a time of 1:03.98. The mark proved to be the best of the sophomore’s career, beating her previous best time of 1:04.23. Joining her teammate, Eliscar also qualified with a third place finish of 1:04.15, also joining in securing a personal record.

Mekayla Brown (Elgin, S.C.) leapt her way to a silver finish in the women’s long jump, headlining a 16 point effort from the Blue and Gold in the event. Her 5.61m jump on her fifth attempt set her above Rhudy, who dropped to bronze after a 5.51m effort had her in second prior to her teammate’s leap. Kendra Whitehurst (Atlanta, Ga.) finished an impressive performance for the women with a seventh place jump of 5.42m.

“We pulled off two podium finishes in the long jump with Mekayla Brown picking up a runner-up spot while competing in her first meet since the indoor conference championship,” said Watts. “Molly Rhudy had the performance of the day with her third place podium finish and Kendra Whitehurst added valuable points finishing seventh.”

With the final field event of the day, the Bucs grabbed more points behind the toss of Noah Shelton (Gray, Tenn.) in the men’s javelin toss. The sophomore launched an effort of 51.83m on his second to last toss, gaining five points for the Bucs.

In the final event of the day, Myles Stoots (Mobile, Ala.) finished just off a podium finish in the 3000m steeplechase. Dylan Zeller (Hixson, Tenn.) finished just a second off his personal best, landing just outside a scoring position with a 10:08.68 time.

On the women’s performance in day one – “Today was as interesting a day of track and field as we've had as a women's team in quite some time. We competed hard throughout the day and had some very fine performances. I did have some concerns about our sprint and hurdles group recovering from injury and illness in time for this meet. Unfortunately, we didn't have enough time to recover and will take a scoring hit in four of those events.”

Looking ahead to tomorrow’s events (women) – “We qualified five people from the prelims, two in the 400m hurdles and three in the 800m run. Add that to the five we have in the 1500m run, three in the 5k, two relays and three field events and we have a lot to look forward to tomorrow.”

On the gritty performances from the men’s side – “We got fourth place finishes in the last track and field events of the day with Myles Stoots scoring in the steeplechase and Noah Shelton fighting a sore groin and elbow finding a way to score in a tough situation.”

Looking ahead to tomorrow’s events (men) – “The men worked hard to grab the points they could today and deserve some recognition. We qualified three in the 800m to go along with three potential scorers in the 1500m run, 5k as well as the 4x400m relay. I expect to put some points on the board in the high jump, triple jump and the hopefully the throws tomorrow.”

On the mindset needed to compete – “We simply must make the most of the situation and compete hard tomorrow for the Blue & Gold.”