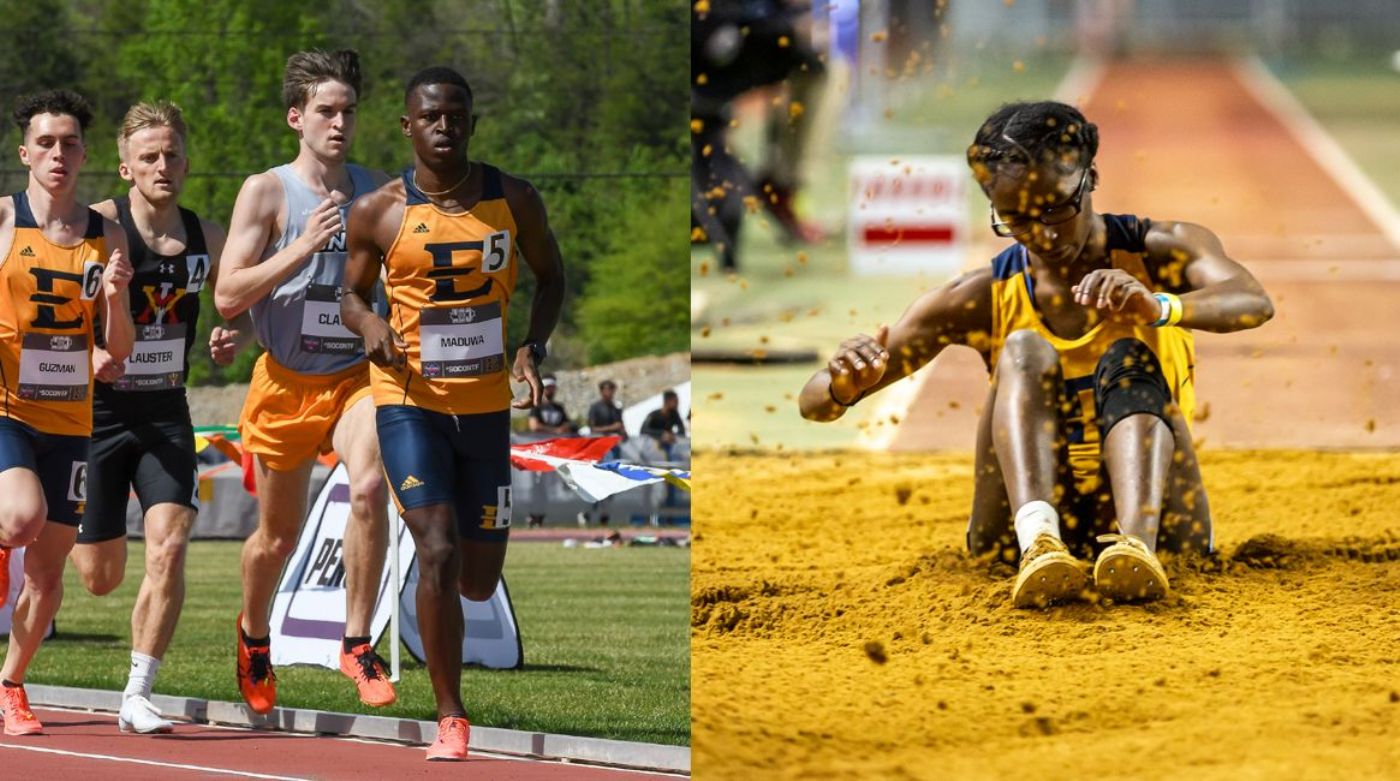 CULLOWHEE, N.C. (May 2, 2021) – Saving the best for last, the ETSU track and field team produced some strong results late in the second day of the Southern Conference Track and Field Outdoor Championships, including a champion-worthy performance from Mekayla Brown (Elgin, S.C.) in the triple jump on Sunday afternoon.

Concluding their second meet at the Catamount Athletic Complex in as many competitions, the Bucs ended on a high as Brown proved the final of three straight podium performances from the Blue and Gold, joined by bronze medals from both 4x400m relay teams in the final track event of the afternoon. In a down-to-the-wire competition in the pit, Brown secured the gold by .01m over her competition, using her fifth of her six attempts to eclipse the lead.

“It took until almost the last event of the meet, but we came away with an individual winner in Mekayla Brown as she won a very tight competition in the triple jump,” stated Director of Track and Field George Watts. “The most impressive thing about Mekayla this weekend is that she had two podium finishes along with contributing a leg on the 4x100m relay in her first meet since the indoor conference championship.”

Brown is joined on the podium by fellow field teammate Mary Brown (Radford, Va.), who opened the day for the Blue and Gold with a personal record in the discus throw that proved enough for a silver finish. Phelani Maduwa (Parys, Free State, South Africa) led the way for the men with the lone individual podium finish after scoring second in the men’s 800m.

"Our throwers had another good day led by Mary Brown's second place finish in the discus as she and Atlantis Warren each scored in three events over the weekend," said Watts. "Margaret [Hayden] added a very important one point as the throwers scored in all four of their events.”

Entering the day in second position on the women’s side, the Blue and Gold wasted no time in adding to their points tally. In the opening event, three Bucs scored in the discus throw, led by Mary Brown. The junior launched her fourth attempt for a collegiate best 40.27m to push her all the way up to a second place finish, scoring in each of her first three events after doubling up on day one. Atlantis Warren (Memphis, Tenn.) secured a seventh place finish with a throw of 37.71m, while Margaret Hayden (Ballymore Eustace, Kilgore, Ireland) followed her program setting performance yesterday with a personal best in the event in the morning, tossing 36.07m for an eighth place finish to give ETSU 11 points in the opening event. Despite missing out on a placement, Anna Moore (Knoxville, Tenn.) also set a personal mark with a throw of 29.91m.

In the third straight event, the Bucs added to their score as two runners crossed the line to earn points for ETSU in the women’s 1500m run. Geneveive Schwarz (Oak Ridge, Tenn.) and Lindsey Stallworth (Knoxville, Tenn.) finished fifth-sixth in the event, just a second separating the two teammates. Schwarz finished with a time of 4:29.07 for her new personal best, while Stallworth’s 4:30.15 falls just short of her best mark. Kiera Snyder (Clyde, Mich.) also set a personal best with a finish of 4:43.06, just missing out on points as the freshman finished 9th in the event.

The men scored their first points of the afternoon in the men’s 1500m. Matthew Scarr (Wamberal, NSW, Australia) led the Bucs with a fourth place finish, crossing the line in a tight finish as his 3:55.43 time was only two seconds off the top mark. Evan Guzman (Franklin, Tenn.) finished at 3:56.19, just over a tenth of a second away from finishing right behind his teammate as the rookie settled for a sixth place spot to give the Bucs an eight point event.

"We came away with two strong places in a very tactical 1500m," commented Watts. "I thought Matt, Evan and Josh ran smart races. It came down to a finishing kick and positioning played a part, but in that scenario, everyone has a kick, and it becomes a question of who has something in the last 50 meters."

Malachi Thomas (Chilhowie, Va.) scored in his first outdoor championship meet, placing eighth in the high jump with a mark of 1.95m. The rookie settled for eighth after securing the mark on his second attempt, two jumpers tying for sixth ahead of him by making that mark in their first effort.

After three women qualified for the finals of the 800m run, the Bucs guaranteed themselves three scoring opportunities on the afternoon. Jessica Lord (Morristown, Tenn.), Julia Karsten (Old Hickory, Tenn.) and Colbie Williamson (Clyde, N.C.) finished sixth-seventh-eighth in the event for the Blue and Gold. Lord’s time of 2:13.76 bested the trio of Buccaneers, while Karsten improved on her previous record by .03s with her 2:14.89 finish. Williamson secured an additional point with her time of 2:23.87.

Phelani Maduwa (Parys, Free State, South Africa) grabbed the first podium finish for the men, securing a second place finish in the men’s 800m run with a time of 1:51.71. Finishing just off a podium finish of his own, Miguel Parrilla (Knoxville, Tenn.) came within .05s of a third place finish, settling for fourth as Guzman rounded off a trio of scorers with his seventh place, 1:53.93 time.

"Like the 1500m, the 800m was equally tactical and it was great to get a podium finish from Phelani and two other places from Miguel and Evan," stated Watts. "I feel bad for Miguel because he got spiked and ran the entire second lap with one of his shoes halve on which made it very difficult to kick."

In back-to-back events for the Blue and Gold, the Buccaneers found themselves with a podium finisher as Brittney Griffith (Kingsport, Tenn.) secured a second place time in the 400m hurdles, just a second off the leader from Wofford. Griffith took nearly two seconds off of her previous best en route to a strong performance. Johnaida Eliscar (Columbia, S.C.) nearly grabbed a spot of her own, finishing in fourth with a time of 1:03.43 as she also bested her previous time by nearly two seconds to grab 13 points for the women to move them back to fourth place in the standings.

Stallworth grabbed her second scoring event in as many attempts, placing fourth in the women’s 5000m run. The junior finished in difficult conditions with a time of 17:26.56.

Warren grabbed her second scoring mark of the day in the women’s shot put. The junior tossed for an 11.57m effort on her second throw that proved good for eighth on the afternoon.

Saving the best for last in the field events, Brown became the first champion for the Blue and Gold. In exciting fashion, the sophomore produced a leap of 11.95m on her second to last jump to push her into first ahead of Samford’s Morayo Bhadmos. Leading by just a quarter of an inch over Bhadmos, the Bulldog had two chances to better her score to leap back to a gold medal. After jumps of 11.90m and 11.92m, it proved short as Brown bested the competition to take the top spot on the podium to be crowned champion after securing a silver medal in the event in the indoor championships. Kendra Whitehurst (Atlanta, Ga.) also solidified a scoring position, her fifth leap of 11.34m securing sixth place on the afternoon.

In the final events of the day, the men and women both took home the bronze in the 4x400m relays. With the women going first, the group of Lord, Karsten, Eliscar and Griffith reduced their previous best time by nearly eight seconds, crossing the line in 3:49.47 to end the track events with six more points to their tally. Isaiah Mills (Freeport, Fla.) joined Maduwa, Parrilla and Guzman on the men’s side for a 3:16.86 finish in the event, less than a second off the silver medalists.

On the performance in the women’s 400m hurdles – “The highlights in the running events must start with Britney Griffith's runner-up finish improving her personal best from yesterday. Her mark ranks 6th on the All-Time ETSU list, along with Johnaida Eliscar moving up to 9th with her fourth place finish.”

On the women’s competitive spirit – “We ended the meet with a 'it's never over until it's over' third place podium finish in the 4x400m relay. Julia Karsten passed a runner right at the finish line to snag the bronze medal for the Bucs. It was an exciting way to the end the meet.”

On the men's 4x400m relay performance - "We finished off the meet with a podium finish in the 4x400m relay and ran one of the best times in several years. All four guys gave great efforts and with two freshmen and two sophomore's running on that team we could have some even faster times to look forward to."

On the toughness of the distance runners – “Lindsey Stallworth proved again why she is one of the top runners in the conference with her double today in the 1500m and 5000m runs. Along with Lindsey we had 10 other women who scored in more than one event which is so important in a conference meet. Genevieve Schwarz coming off an illness ran a PB in the 1500m breaking 4:30 for the first time in her career to finish right ahead of Lindsey in the 1500m run.”

On the team performance today for the women  - “Our women maxed out on their performance today. We had a lot happen to be excited about and much to look forward to for the future. We scored in every event we contested today, and I couldn't be happier with the team's overall result on Day Two.”

On the team performance today for the men - "Our men did a solid job with the people we had in the meet. I think there were a couple of freshmen who struggled a little, but still have a great promise for the future.  Otherwise, although we were a little shy of our point goal, these guys compete as hard as they can every time out."