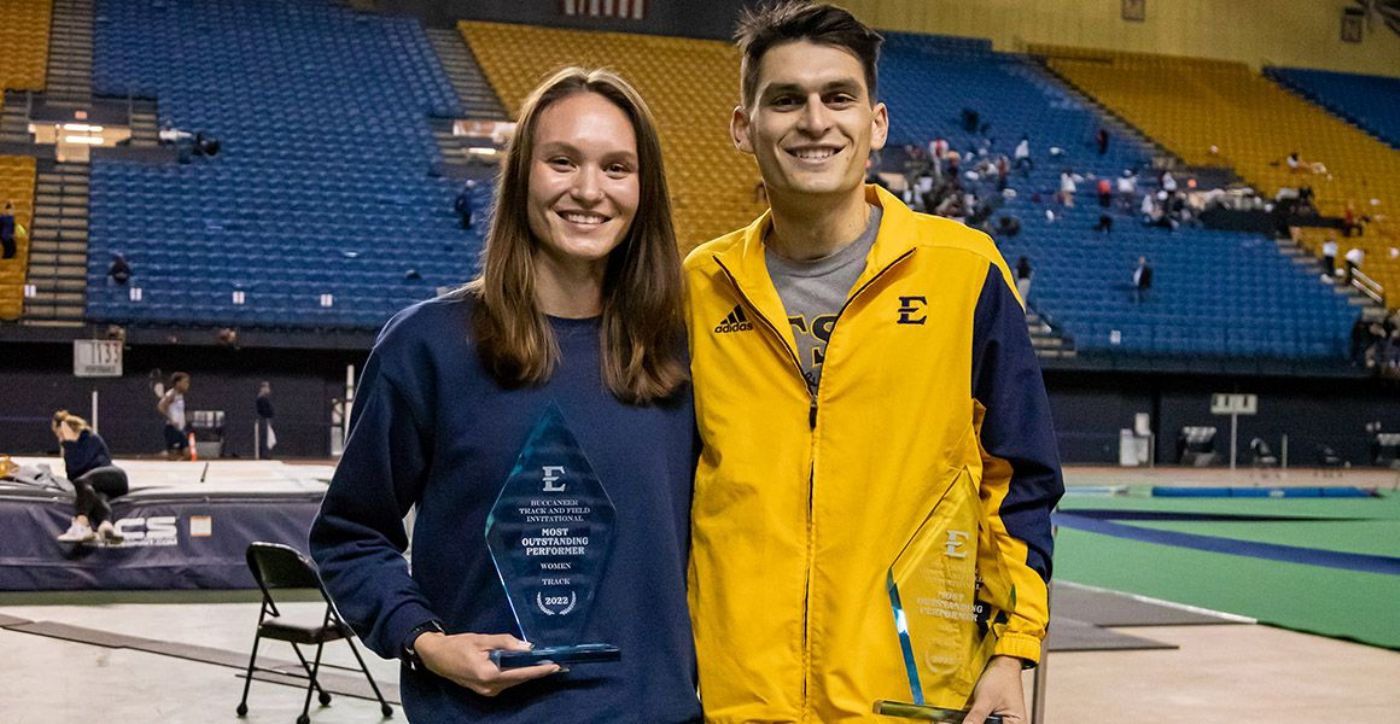 JOHNSON CITY, Tenn. (Feb. 5, 2022) – The ETSU men’s and women’s track and field teams put a golden stamp on their final home meet of the indoor season on Saturday from the David E. Walker Track inside the Ballad Health Athletic Center.

The Bucs, who captured a total of 10 gold medals on the weekend, recorded seven top finishes on the final day of the meet. ETSU swept titles in the 800m, mile and 3000m, while also winning the women’s 60m hurdles. Overall, the Blue and Gold registered 20 podium finishes on Saturday as ETSU swept the top spots in the women’s 800m, men’s mile and men’s 3000m, while also setting new meet records in the men’s mile and both men’s and women’s 3000m.

At the post-race ceremony, Genevieve Schwarz (Oak Ridge, Tenn.) and Adam Bradtmueller (Sarasota, Fla.) were named Track Athletes of the Meet. Schwarz won both the 800m and mile, while Bradtmueller took home gold in the mile.

Miguel Parrilla (Knoxville, Tenn.) made it a men’s and women’s sweep in the 800m as he clocked in at 1:51.97, while teammate Phelani Maduwa (Parys, Free State, South Africa) finished second in 1:56.57. With the win, Parrilla made it back-to-back gold medal runs in the event at the Buccaneer Invitational.

In the sprints, Nicole Johnson (Chattanooga) and Mekayla Brown (Elgin, S.C.) went second and third in the 60m. Johnson ended with silver as she crossed the line in 7.71 and Brown was third in 7.72.

The women’s 4x400m relay team made up of Hannah Burkhart, Lindsay Cooper, Jessica Lord, and Mekayla Brown finished with the silver as the registered a time of 3:57.38.

Less than 24 hours after setting a PR in the weight throw, Zach Fejeran (Tazewell, Tenn.) posted a new personal best in the shot put with a mark of 12.87m.

During the afternoon portion of the meet, ETSU Athletics and the Track and Field program recognized 19 seniors who were competing in their final home meet. Congratulations to our seniors for their hard work, dedication and commitment to the Blue and Gold. Those who were recognized with their family, friends and teammates in attendance were:

“This meet is an opportunity to recognize our seniors who will be graduating and/or finishing up their eligibility this year,” said ETSU Director of Track & Field/Cross Country George Watts. “Some of those graduating will return, but we had huge turnout of family members for our student-athletes, and I really appreciate their support and attendance at the meet.  We've always had a great following of parents and I look forward to it continuing in the future.”

Today was a good day for ETSU Track & Field at the Buccaneer Track & Field Invitational.  We swept the men's Mile Run, 3k and the Women's 800m along with victories in the women's 60m Hurdles, Mile Run and the men's 800m.  Plus, there were six other podium finishes to go along with those performances.

It's difficult to single out any one individual as this was as much a team effort as you can get in what is considered an individual sport.

Lindsay Cooper and Mekayla Brown had solid meets, and it was nice to get Nicole Johnson back out for the first time this year. Ja'Ciya Guthrie, another newcomer, is an athlete who can make a difference in a couple of events at the Conference Championship.

There are always hidden performances that aren't necessarily in the top 3 but deserve mentioning. Zach Fejeran is one of those, as he had personal bests in both throws and continues to get better each meet.

The major highlight could be considered Genevieve Schwarz and Adam Bradtmueller winning the Track Athlete of the Meet award.  Gen won the Mile and 800 and Adam won the Mile in 4:07.03 – breaking the meet record set in 2019 by former Buc Ben Varghese.  In addition, Lindsey Stallworth and Myles Stoots established new meet records in the 3000m Run.

We have another meet next weekend as a final tune-up for those who have met our travel standards.  We want to compete as many people as possible so we can finalize our travel numbers for the Conference meet at the end of the month.

Finally, I can't thank Larry Manis and our officiating crew enough for the tremendous job they do each year. Their support and loyalty go above and beyond the call of duty. The alumni who give back by coming out to help officiate means a lot to our kids.  We simply could not put on a track and field meet without them.

The Buccaneers make their final tune-up before the SoCon Championship as ETSU will split squads, going to Nashville for the Music City Challenge and Lynchburg, Va., for the Darius Dixon Memorial Invitational.