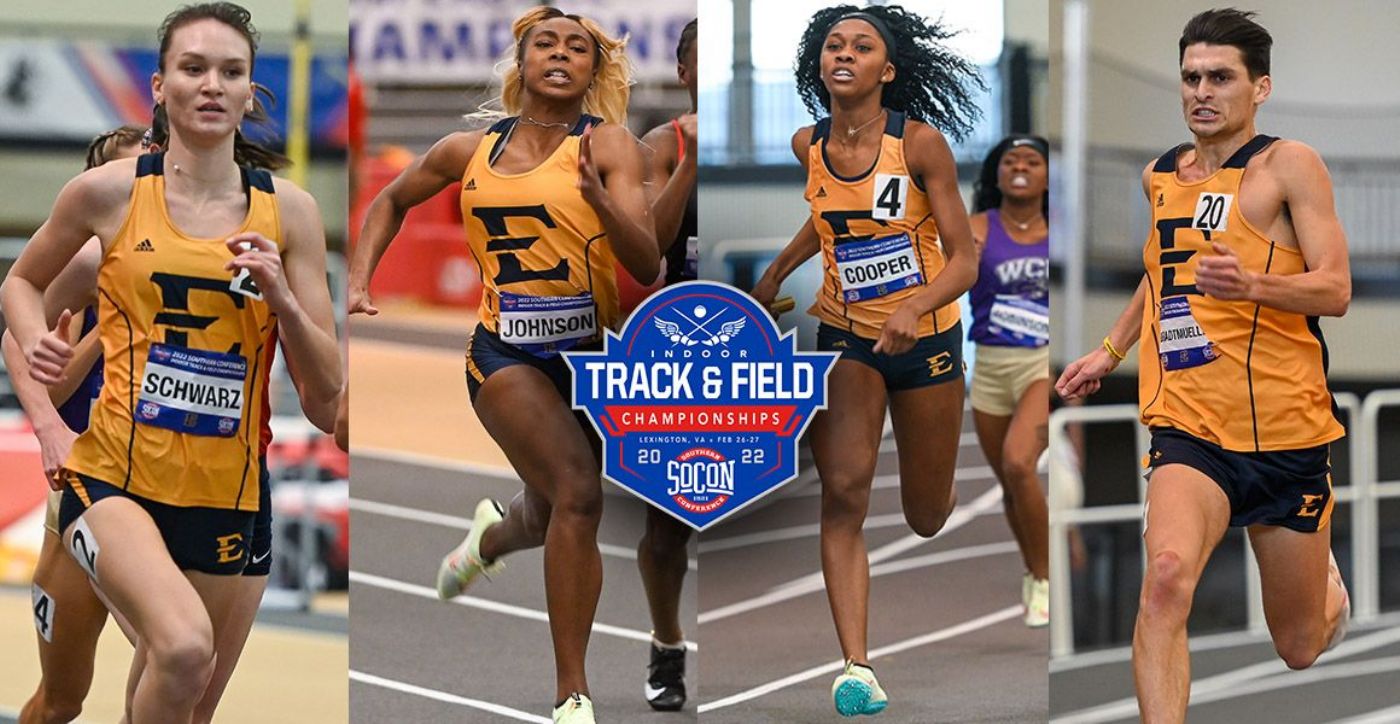 LEXINGTON, Va. (Feb. 27, 2022) – The final day of the Southern Conference Indoor Track & Field Championships saw a lot of drama and impressive gold-medal performances by the Buccaneers. After posting five wins on day one, ETSU captured four more golds, including three by the Buccaneer women, as they finished runner-up following the final day of competition on Sunday from the VMI Corps Physical Training Facility.

Nicole Johnson (Chattanooga, Tenn.) kept the title as the “fastest women’s sprinter in the SoCon” as she collected her third straight conference crown in the 60m dash after clocking in at 7.52, becoming just the second student-athlete in conference history to win the event in three consecutive years.

Johnson wasn’t the only Buccaneer to defend gold as Genevieve Schwarz (Oak Ridge, Tenn.) won the mile with a time of 4:51.72, which was a full second faster than second-place finisher Bethany Graham of Furman. Schwarz is the third ETSU runner to win the event in back-to-back years, joining Sabrina Keeton (1988-89) and Valerie Urchison (1997-98) to accomplish the feat.

In the final event of the day, the ETSU women’s 4x400m relay team of Hannah Burkhart (Knoxville, Tenn.), Johnaida Eliscar (Columbia, S.C.), Lindsay Cooper (Charlotte, N.C.) and Jessica Lord (Morristown, Tenn.) turned in the fastest performance on the track, as the Bucs beat out Western Carolina for gold, finishing with a time of 3:53.96. The win snapped Samford’s three-year run winning the event, while it was just the fourth time ETSU won the event at the SoCon championships (1995, 2001, 2017).

Less than 24 hours after taking a fall in the men’s 3000m, Adam Bradtmueller (Sarasota, Fla.) capped off a decorated indoor season by capturing gold in the 5000m. Bradtmueller, who finished second in the 3000m on Saturday, set a personal best and facility record in the 5000m with a time of 14:08.18. The Sarasota, Fla. native was the crowd favorite in the event as he defeated Furman’s Dylan Schubert by over two seconds en route to ending the Paladins’ four-year run of capturing gold. In addition, Bradtmueller became the first ETSU distance runner to win the event in the SoCon since 2003 when Brad Yewer won gold, while he’s now the 10th Buccaneer to win the 5000m in the history of the SoCon meet. Bradtmueller also joined the greats such as Seamus Power (four-time winner), Adrian Leek, Brian Dunne, James Hynes, John Erickson, Carey Nelson and James Grufferty.

Overall, the Buccaneer women finished runner-up for the second time in the last three years as they totaled 146.5 points – the most by an ETSU women’s team at the SoCon indoor meet. The Blue and Gold were edged out by 15 points over Samford, as the Bulldogs won for the seventh straight year. The previous record of points scored by an ETSU women’s team was 134, set in 2020 when they also finished second.

On the men’s side, ETSU finished fifth with 74 points.

For the championship, the Bucs generated 20 podium finishes.

We had a very solid two days at the SoCon Championships over the weekend.  We scored in16 of 17 events, had three wins, our share of podium finishes and had 20 of 25 athletes score.  All in all, a great meet for the women.  Nicole and Genevieve had the challenge of defending their titles, which sometimes can be more difficult than winning your first.  Nicole has dominated the 60m now for three years straight and that's an impressive streak.  Genevieve stuck to her race plan and timed her finishing kick just right to come away with the victory.  Winning the 4x400 was a great way to end the meet. It was a lot of fun to watch and a huge positive as we move into the outdoor season.  The women's team competed hard, did everything that was asked of them and it paid off with a nice overall performance.  We need to regroup, recover and rededicate ourselves and begin preparation for the outdoor season.

I'm very pleased with the team's performance as I feel they overachieved this weekend by exceeding the form chart and coming away with some outstanding performances.  Certainly, the DMR win on Friday and Adam’s win in the 5k on Saturday were two of the main highlights of the meet.  Adam had a heartbreaking result in the 3k, but showed what kind of competitor he is by coming back to take the 5k the next day. The relays are always exciting races and for us the DMR was no exception. All four guys ran strong races to put together one of the better results ETSU has had in the event through the years. The men made nice progress from the previous year and look forward to seeing what they can do during the outdoor season.

ETSU turns its attention to the outdoor season which begins March 17 at the 49er Classic in Charlotte.