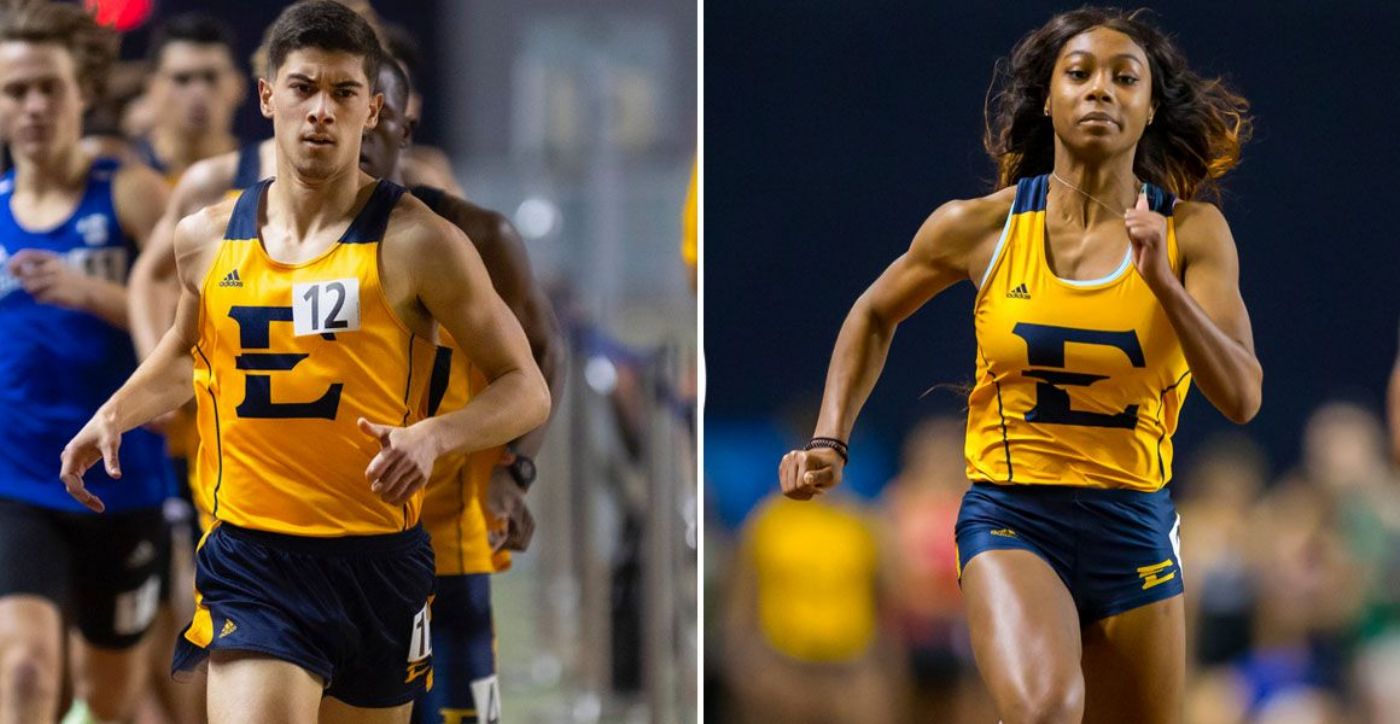 The ETSU men’s and women’s track and field programs bagged seven gold medals, including sweeps in the 800m and steeplechase, as the final day of the Catamount Classic concluded on Saturday from the Catamount Athletic Complex.

In addition to the seven wins, the Buccaneer women’s team finished runner-up in the team scoring by the slimmest of margins. ETSU totaled 176 points, while fellow Southern Conference foe Wofford tallied 176.5 points to win the team event. Host Western Carolina, the only other conference team competing at the meet, placed third with 134 points. On the men’s side, the Bucs placed third with 103 points, finishing ahead of Wofford – who totaled 67 points. Western Carolina won the meet with 174 points and UNC Asheville was runner-up (127.5 points).

ETSU’s gold-medal efforts started with Genevieve Schwarz (Oak Ridge, Tenn.) defending her crown in the 800m with a personal best time of 2:07.87. Schwarz, who shaved just under three seconds off her previous mark, captured her fourth outdoor win of the season and the second in the 800m. Overall, the Blue and Gold recorded five of the top nine spots in the event, as Julia Karsten (Old Hickory, Tenn.) placed second in 2:12.08, Jessica Lord (Morristown, Tenn.) was fourth (2:16.77), Shila Kapaya (Knoxville, Tenn.) finished seventh (2:18.89) and Rebekah Howard (Ashland, Ky.) came in ninth (2:19.52). Karsten and Kapaya joined Schwarz with PRs in the event.

The Bucs made it a clean sweep in the 800m as Miguel Parrilla (Knoxville, Tenn.) registered his sixth career win in the 800m (first outdoor), ending with a top time of 1:50.48. In the end, ETSU went 1-2-3 in the event, while also capturing five of the top seven spots. Phelani Maduwa (Parys, Free State, South Africa) and Josh Krafsur (Fort Collins, Colo.) went second and third, respectively, while Evan Guzman (Franklin, Tenn.) – last year’s champion in the event – came in fifth and Myles Stoots (Mobile, Ala.) was seventh. Maduwa turned in a time of 1:51.30 and Krafsur set a PR as he clocked in at 1:52.01.

The 800m wasn’t the only event ETSU brought the brooms out for.

Makayla Shaw (Jonesborough, Tenn.) and Gavin Cooper (Jacksboro, Tenn.) also accomplished the sweep in the steeplechase, marking their first collegiate wins in the event. Shaw won by over 10 seconds with a PR of 11:17.67 – slashing her previous top time by over 20 seconds. Meanwhile, Cooper crushed the field on the men’s side, as he was the only runner in the field to post a sub-10 minute mark, finishing in 9:21.13 – taking five seconds off his top run in the steeplechase.

The golds also came in the women’s sprints and hurdles on Saturday in Cullowhee.

Lindsay Cooper (Charlotte, N.C.) took the top spot in the 400m hurdles with a time of 1:02.92, while teammate Nicole Johnson (Chattanooga, Tenn.) sprinted her way to gold in the 100m. Johnson set a personal best with a time of 11.99, marking her first collegiate win in the event and first outdoor title. Cooper also gave the Bucs a second-place effort in the finals of the 100m hurdles (14.04).

The Buccaneer duo also played a major role in ETSU’s seventh and final gold-medal performance as the Blue and Gold took home the top spot in the women’s 4x400m relay. Joining Johnson and Cooper in the event were Lord and Hannah Burkhart (Knoxville, Tenn.) as they totaled a time of 3:50.47, beating out Wofford – last year’s event champion – by over three seconds. ETSU’s win marked its first in the event since coming away victorious at the 2018 conference championship.

The Buccaneer throwers also had a day of personal bests.

Anna Moore (Knoxville, Tenn.) and Alyssa Ceja-Pena (Salinas, Calif.) both set PRs in the discus. Moore placed eighth with a mark of 36.43m and Ceja-Pena was 10th with a distance of 35.27m. Moore also set a PR in the shot put as she finished seventh with a heave of 11.45m.

On the men’s side, Noah Shelton (Gray, Tenn.) set a personal best in the discus with a distance of 39.40m, placing seventh.

The Bucs have one final tune-up before the SoCon Outdoor Championships as ETSU is scheduled to travel to Charlottesville for the Virginia Challenge, beginning next Friday, April 22.