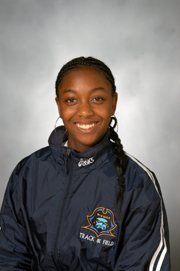 2005 Indoor: Competed in two meets in her first season with the team ... placed 20th in the 400 meters at the Appalachian Invitational.

Prep: Was a four-year letterwinner in track for coach Andy Arnold at Tennessee High in Bristol, Tenn. ... was an all-conference member in all four of her seasons.