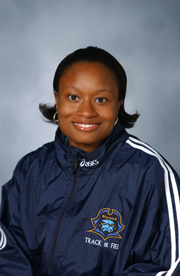 2003 Outdoor: Hampered by an injury which did not allow her to compete in the spring.

Personal: Born in Toronto, Ontario... majoring in pre-med... Nichola is the daughter of Gary and Elizabeth Tomlinson.