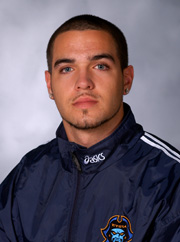 2006 Cross Country: Finished seventh at the Irish Brigade Commemorative 5K, the only meet he competed in all season.

2006 Outdoor: Finished third in the 4x400 relays at the Liberty Invitational … placed fourth in the 400-hurdles with a mark of 57.71 at the A-Sun Championships.

2006 Indoor: Earned two silver medals at the A-Sun Conference Championships, taking second in the 400-meters with a performance of 51.74 and ran a leg in the 4x400.

Prep: Two-sport competitor in both football and track… eight-time letterwinner in track and two-time in football… two-time most valuable indoor runner… coaches award recipient as a junior… most valuable senior athlete… member of state champion 4x400 team as a senior… school record holder in the 600 meters.