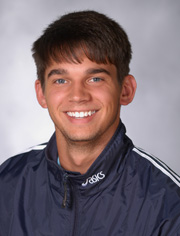 2007 Outdoor: Placed first in the pole vault at the Milligan Relays and Furman Invitational … posted a season-best mark (14-01.25) at the conference championships.

2005 Outdoor: Redshirted the outdoor season due to injury.

2005 Indoor: Finished tied for eighth at the East Tennessee Indoor with a vault of 4.10 meters.

Prep: Competed in pole vault for four years and lettered three under coach Chris Frary ... placed fourth in region finals ... recorded a personal best of 12' in the pole vault ... an all-around athlete ... was a wide receiver for four years for his high school football team, lettering two of those years.