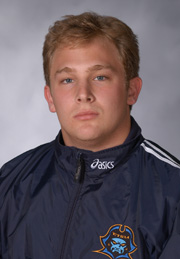 2007 Outdoor:  Tossed a season-best and placed second in the hammer at the Furman Invitational.

2007 Indoor: Competed in six meets in either the hammer or shot put.

Prep: Two-sport athlete in both football and track … three-year letterwinner in football and one year in track … all-state football selection and all-state in the 100-meters.

Personal: Born on February 21, 1986 … son of William Hornsby and Gay Talbot … plans to major in exercise science … father was a sprinter for USC.