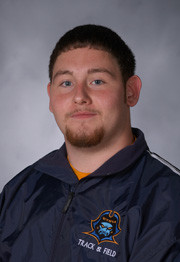 2006 Outdoors: Finished first at the UCF Invitational … posted a season-best throw in the discus at the Milligan Open … set season-bests in the hammer and shot put at the A-Sun Championships … participated in four different meets in either the shot put, hammer or discus.

Personal: Born on April 21, 1986 … of Charles and Carol Jones … plans to major in physical education.