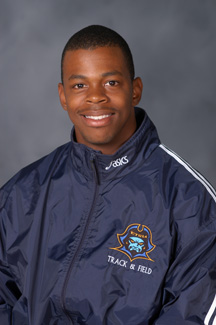 2006 Indoor: Had an exceptional weekend at the A-Sun Indoor Championships, posting a total of 37 points, the most by any individual in the competition … he began the day with a gold-medal performance in the heptathlon, scoring 4,455 points, over 250 points ahead of the second-place finisher … posted second place finishes in the 60-meter hurdles (8.48) and high jump (6-4).

2005 Indoor: Placed third in the heptathlon at the SoCon Indoor Championships with a 4375 score … placed tenth in the 55m hurdles at the Mountaineer Winter Invite.