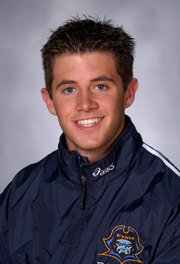 2008 Outdoor: Carried his success from the indoor season into the

outdoor campaign ... placed second in both the long and triple jumps

... finished second in the long jump at the Lenny Lyles/Clark Wood

2008 Indoor: Made an immediate impact in his first year with the Bucs

... scored 18 points at the conference championships, placing third in

Prior to ETSU: Competed at King College ... received all-America

2008 Outdoor: Competed in four meets and posted a season-best

conference championships ... placed third in the 5000m and sixth in

the 3000m ... took home the title in the mile at the Appalachian State

2007 Cross Country: Appeared in all six meets ... was an all-conference

selection after finishing second at the Atlantic Sun Championships ...

was primarily the number two runner for the Buccaneers ... posted three

... placed sixth in the mile at the A-Sun Championships.

2006 Cross Country: Competed in six races for the Bucs ... finished

2006 Indoor: Had an outstanding weekend at the A-Sun Indoor

Championships, coming away with two gold medals, along with

a silver-medal performance ... took the conference crown in the

2005 Cross Country: Ran in all six events ... named to the all-conference

and all-freshman teams, with a tenth place finish at the

letterwinner in track at Wade Hampton High School ... coached by

history to make all-state five consecutive years in one sport ... named as

Country Team ... named as the runner of the year by Greenville County