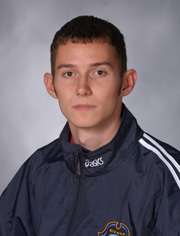 2007 Outdoor: Competed in two meets and placed fifth at the A-Sun Championships and third at the Furman Invitational.

2007 Indoor: Competed in two meets and finished a season-best third in the high jump at the Appalachian State Invitational.

2006 Outdoor: Named to the U.S. Track and Field and Cross Country Coaches Association (USTFCCA) All-Academic Team … kept his conference winning streak intact, earning gold-medal honors at the A-Sun Championships with a personal-best mark of 6-6.75 (2.00m), the win earned him his fourth career conference title … finished second at the Western Carolina Invitational (6’0.75/1.85m) and sixth at the 49er Classic (6-2.75/1.90m).

2006 Indoor: Continued to dominate the high jump competition at the conference level, winning his third-straight conference crown with a leap of 6-4.75 (1.95m) at the A-Sun Championships … jumped a season-best 6-5.5 (1.97m) at the Liberty Record Bash.

2005 Outdoor: Competed in six high jump events, finishing in the top-10 every time… jumped 1.83 meters at the Walker Open to finish second… cleared the bar at a season best 1.98 meters at the SoCon Outdoor Championships to win the high jump title.

Prep: Four-year letterwinner in track and field under coach Kelly Beason ... set a school record in the high jump of 6’4" in 2004 ... named as the 2004 regional champion in the high jump and placed third at the state meet ... earned his team’s field event MVP award ... member of the AAU Knoxville Track Club in 2003 ... placed second at the SEA Championships and AAU Region III track and field championships and qualified for the Junior Olympics in 2003 ... also successful academically, was a DECA officer and a reporter and member of his high school’s National Honor Society.