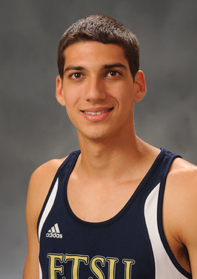 2011 Cross Country: Competed in the Atlantic Sun Championship meet where he finished 58th with a time of 28:49.05.

2011 Indoor: All-Atlantic Sun performer after running a led in the DMR and 4x400m relay, which both placed third … competed in five meets, while seeing action in both the 800m and high jump … finished fifth in the high jump at the conference championship.

2010 Cross Country: Competed in only two meets for ETSU … raced in the season-opening meet at the Covered Bridge Open in Boone, N.C. and at the Charlotte Invitational in October.

2010 Outdoor: Only competed in one meet for the Bucs as he raced in the 4x200m relay at the Coastal Carolina Shamrock Invite.

2010 Indoor: Appeared in five meets with the Bucs, while competing in the 800m, mile, and 4x400m relay … placed fifth in the 800m at the A-Sun Championships and Clemson Invitational.

2009 Cross Country: Only raced in one meet – finishing 61st at the A-Sun Championships in DeLand, Fla.

About Jones: Four-year letterwinner in track and field and cross country for the Patriots … received Triple Gold honors in the 800m, 1600m and 4x800m at the district and conference championships … named All-Conference in 2009.