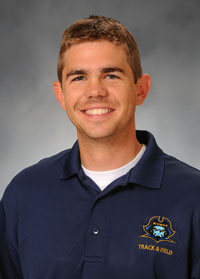 Eli Sunquist enters his fourth season as an assistant track and field coach at East Tennessee State University. Sunquist will continue to work with all the male and female field athletes, while emphasizing on the vertical and horizontal jumps as well as the combined-event athletes.

In just his first three seasons with the Bucs, he has coached the jumpers and combined event athletes to 11 individual conference titles, 5 conference records, 31 all-conference performers, and 4 school records.  Coach Sunquist has coached at least one all-conference performer in each one of the jumping (long jump, triple jump, high jump and pole vault) and combined events (decathlon and heptathlon) in his three years at ETSU.  The triple jump is one event where ETSU has thrived since Sunquist has arrived, having 10 all conference performances in that event over the past 3 years.  Sunquist also has had success in coaching the javelin, coaching the past two conference champions in that event (Les Gilbert in 2010 and Matt Baum in 2011).

Sunquist was also able to help three Buccaneers win the first conference title in school history for their perspective events; Josh Cloyd in the indoor triple jump, Ryan Beaver in the outdoor triple jump, and Matt Baum in the indoor pole vault.  In addition, during the 2010 season, he had 6 different athletes named as conference field event athletes of the week (Ryan Beaver, Bethany Lender, Kelly Monteleone, Jordan Briggs, Matt Baum, and Nic Chernikow).  Sunquist was also able to coach Jason Johnson to a 10th place finish at the USATF Jr. Nationals in the triple jump during the summer of 2010.

Sunquist brings an excellent track record to the Buccaneer program, both as a coach and an athlete. The Pittsburgh, Pa. native spent two years coaching the Charlotte 49ers, his alma mater, before joining the ETSU staff. While at Charlotte,Sunquist supervised all the male and female field event athletes. Under his watch, Sunquist qualified six horizontal jumpers to the NCAA Regional meet, and saw 10 of his athletes win Atlantic 10 conference crowns. The most notable athlete Sunquist assisted and trained was international triple jumper Allen Simms – who was ranked as high as 21st in the world.

“Not only has Eli had success in coaching track and field, but he was a top athlete while competing at Charlotte,” commented Dave Walker. “With his experiences and knowledge of the sport, he can really help our athletes reach the next level.”

During his time competing for the 49er track and field team, Sunquist built quite an impressive resume in the triple jump. He was a three-time NCAA Regional Qualifier, two-time Atlantic 10 Conference medalist, named all-conference twice in Conference USA, and won a pair of A-10 team championship rings in both the indoor and outdoor season. Sunquist also shined in the classroom, where he was named to the US Track & Field Coaches All-Academic Team and was also on the Dean’s List.

In May 2008, Sunquist received his Master of Arts Degree in Liberal Studies from Charlotte, where he conducted a thesis on U.S. women’s triple jump.

Sunquist is member of the National Pole Vault Coaches Association and United States Track & Field and Cross Country Association. He is also USATF level 1 certified, and Level II certified in the jumps and combined events.  He and his wife Tara, a former UNF volleyball standout, reside in Johnson City.