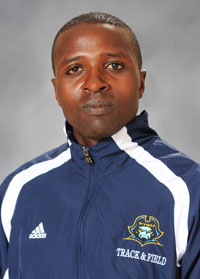 2010 Indoor: All-Atlantic Sun performer in the 5000m after placing third … claimed the 3000m title at Liberty and finished second in the mile at the Appalachian Invitational.

2010 Cross Country: Named First Team All-Atlantic Sun after finishing fourth at the conference championships in Spartanburg, S.C. … competed in five meets as a senior and led the Bucs across the finish line in four of them … showcased a second-place finish at the Upstate Invitational on October 16.

2010 Indoor: All-Atlantic Sun performer after running a leg in the DMR that placed third overall … competed in five meets and raced the 800m, mile, 3000m, and 5000m events … won the mile at the Appalachian Invitational and was second in the 5000m at Liberty.

2009 Cross Country: Named All-Atlantic Sun and All-Region … finished sixth at the conference championships and 21st at the NCAA South Regional … competed in all six meets for ETSU.

2009 Indoor: Named Most Outstanding Track Performer … First Team All-Atlantic Sun in the 3000m and 5000m, while also scoring points in the mile (fifth) … executed three first-place finishes in the mile.

2008 Cross Country: Named all-conference and all-region … finished second at the Atlantic Sun Championships and 21st at the South Regional … led the Buccaneers across the finish line in two of the seven meets he competed in.

Prior to ETSU: Ran cross country and track and field at Milligan College for one year.

Personal: Born May 12, 1986 … majoring in Sport and Leisure Management.