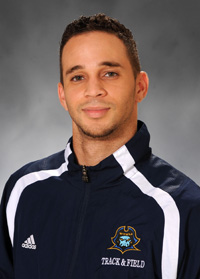 Prior to ETSU: Multi-sport athlete at Jefferson County High School... lettered in both track and football... set the long jump record at the 2009 Big East Challenge... led the Patriots to back-to-back IMAC Championships in 2008 and 2009.