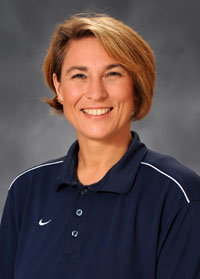 Doro Martin enters her first year with the ETSU Buccaneer Track and Field program. Martin will oversee the men’s and women’s throwers.

Martin comes to ETSU with 12 years of personal track and field experience in both the multis and throws events. Martin spent the last year as the assistant track and field coach at Daniel Boone High School and with the Slipstream Track & Field Club. While at Daniel Boone, Martin was responsible for coaching 20 throwers and sent three to the TSSAA Sectionals. Martin also coached a group of seven throwers and four decathletes at the Slipstream Track & Field Club, while three of her throwers and decathletes qualified for the AAU Junior Olympic Games.

Prior to her time in the states, Martin worked as a trainer for American Football teams as well as a coach for a club based track and field team in Germany. During her stint with the American Football Teams, Martin was responsible for all medical needs and helped develop the junior teams’ (16 to 19 year olds) speed/agility workouts, stretching, and strength workouts during the off season. While coaching the track and field club in Germany, Martin oversaw a wide group of athletes – ranging from youth to adult levels of competition. Martin helped send men’s and women’s teams to the State Championships each season, as well as three individuals in the multi events.

Throughout her athletic career Martin achieved many accomplishments as she competed in regional and state championships, but also on the national level. Martin placed first in the nation at the 1985 shot put event, while also qualifying for nationals in shot put, discus, and heptathlon in 1987. In addition, Martin trained at the state Olympic center for four years with the throwers and heptathlon group.

“Doro should have an immediate impact on our throwers, as well as in our recruiting efforts,” added Walker. “Having spent most of her life in Germany, and most recently coaching here in the state of Tennessee, Doro will be able to help us identify coaches and athletes in Germany, as well as within the state.”