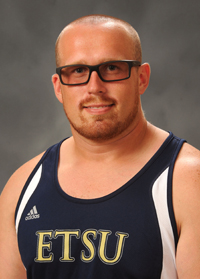 2013-14: Competed in three indoor meets and six outdoor meets ... achieved a personal best in the weight throw with a ninth-place finish at the A-Sun Indoor Championships with a 14.00 meters mark ... posted a personal high in the shot put at the Radford Invitationoal with a mark of 13.08 meters during the outdoor season ... also during the outdoor season, turned in a third-place finish in the hammer throw with a toss of 46.67 meters at the Catamount Classic.