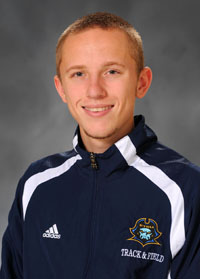 2011 Cross Country: Competed in all five meets... was the second Buccaneer to cross the finish line at the Mountaineer Open with a time of 20:12.7 for 28th-place.

2010 Cross Country: Competed in all five meets as a freshman... the Jonesborough, Tenn. native placed 20th at the Upstate Invitational, 31st at the A-Sun Championships and 36th at the Mountaineer Open in Boone, N.C.