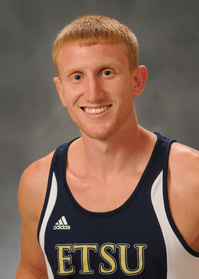 2013-14: Competed in six indoor meets and eight outdoor meets ... registered three top-10 finishes during the indoor season including placing seventh in the 200M at the A-Sun Championships with a time of 23.68 ... member of a strong 4x4 team that recorded four top-10 finishes during the outdoor season featuring a second-place finish at the Radford Invitational with a time of 3:26.94 and a third-place standing at the University of Tennessee Challenge with 3:31.06 time.