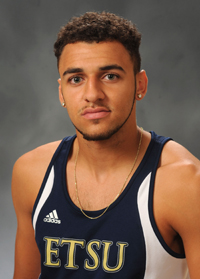 2015-16: Competed in four outdoor and four indoor meets ... at the SoCon Indoor Championships finished third in the distance medley relay with a time of 10:17.11 ... recorded a top ten finish (7th) at the Western Carolina Track and Field Invitatoinal in the 400 meters with a time of 50.64

2014-15: Competed in four indoor and six outdoor meets ... at the SoCon Outdoor Championships finished ninth in the triple jump with a personal best 13.08 meters ... apart of the successful 4x400M relay team that finished secodn with a time of 3:21.83 at the Catamount Classic ... earned the victory as part of the distance medley relay team at the Buccaneer Invitational.