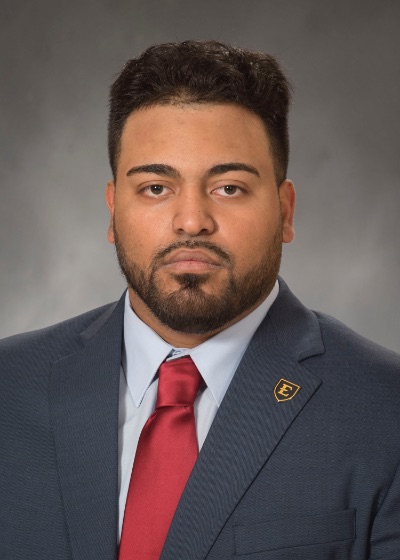 Steven Sanchez has been a member of the ETSU track and field coaching staff since September 2016. Sanchez works directly with the throwers on the men’s and women’s track and field teams.

Sanchez has worked closely with Ben Johnson while at ETSU, who has left his mark in the Buccaneer history book with one indoor and four outdoor school records while also setting new Southern Conference records, facility records and meet records throughout his five year career. Sanchez also accompanied Johnson during his run as a 2018 Second Team Division I Indoor Track & Field All-American in the men’s weight throw.

Prior to ETSU, Sanchez joined the Division III Plattsburg State University coaching staff and coached an ECAC Division III qualifier in the women’s shot put and discus in his only season.

Sanchez also worked on the Division II level at nearby King University in Bristol, Va. as a graduate assistant with responsibilities for the Throws, Combined Events and Strength & Conditioning in May 2015. During the season, he coached an athlete to a first place finish in Women’s Indoor Shot Put and a runner-up finish in the Weight Throw at Conference Carolinas Indoor Track & Field Championship.

Collegiately, Sanchez competed for Division II Limestone College from 2012-15 and for ASA College (NY) from 2011-12. While at Limestone, he helped the Saints win the 2013 Conference Carolinas Outdoor championship.