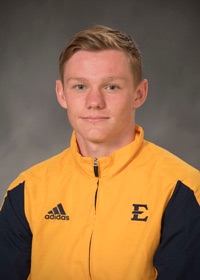 2019 Track & Field: Opened his season at the ETSU Track and Field Invitational (Jan. 11-12)…placed first in the 3000m with a time of 8:31.93 at the VMI Team Challenge (Jan. 26)…placed sixth at the SoCon Indoor Track and Field Championships (Feb. 23-24) in the mile…grabbed silver in the HPU VertKlasse Meeting (March 21-23) with a time of 1:51.55…helped the team to a fifth place finish in the 4x400m relay while placing fifth in the 800m and finishing with a personal record 3:50.33 in the 1500 at the SoCon Outdoor Championships (April 27-28)…earned a spot on the SoCon Honor Roll…a SoCon Academic All-Conference selection…a recipient of the SoCon Commissioner’s Medal.

2018 Track & Field: Competed in five indoor and six outdoor events ... Finished in the top five in eight of his nine races during indoor season to open his ETSU career, including a pair of top finishes as a leg on DMR teams ... Won three individual events during outdoor season, including two wins on the same day in the ETSU Tri-Star Classic 800m and 1500m ... Also had the fastest time in the Catamount Classic's 800 ... Scored twice at the Southern Conference Indoor Championships, once with a top DMR finish and a fourth place finish in the 800 meter final after having the top qualifying time ... Scored again in the 800 at the outdoor championships, finishing third after having the top qualifying time in the prelims ... Set his 800 PR in the Liberty Elite at 1:53.52 (indoor) and his 1500 PR at 3:51.97 in the Raleigh Relays (outdoor).

Prior to ETSU: Ran cross country and track & field at Central Coast Grammar School in Australia for head coach Paul Geddes ... Placed first in the 1500m event and second in the 800m event at the 2017 New South Wales U20 Championships ... One of 70 NSW recipients of the Pierre de Coubertin Olympic Award, which recognizes performance along with fair play and sportsmanship ... Was named athlete of the year for both cross-country and track & field while in high school ... Also participated in cricket and soccer in high school.