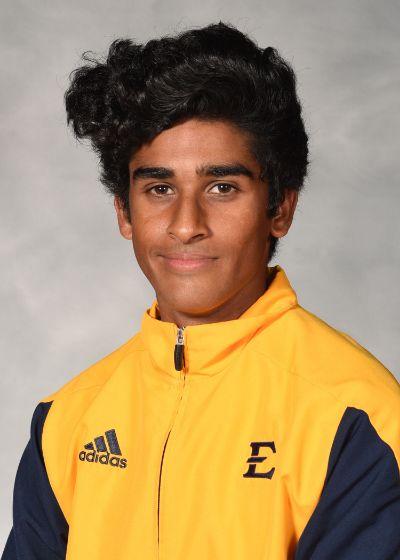 2019 Track & Field: Opened the season with four straight golds in consecutive meets, splitting between the 3000m and the mile…set a PR in the opening ETSU Track and Field Invitational (Jan. 11-12) in the mile for a time of 8:16.53 time in the 3000m before matching his finish at the Gamecock Inaugural (Jan. 18-19) a week later…switched to the mile and took first at the VMI Team Challenge (Jan. 26)…followed up with another first place finish on his way to a personal best time of 4:07.30 in the mile at the Buccaneer Track and Field Invitational (Feb. 1-2)…competing in both the events at the SoCon Indoor Championships (Feb. 23-24), Varghese grabbed gold in the 3000m and a fourth place finish in the mile at the conference tournament…opened his outdoor season with a gold in the 1500m at the Charlotte 49er Classic (March 14-16)…grabbed a personal best of 14:11.80 at the Raleigh Relays (March 29-30) in the 5000m…grabbed his PR in the 1500 two weeks later at the Tennessee Relays (April 11) with a mark of 3:50.19…marginally missed out on scoring in the 1500 at the SoCon Outdoor Championships (April 27-28) before coming back with a sixth place finish in the 5000m…earned a spot on the SoCon Honor Roll…a SoCon Academic All-Conference selection.

2018 Cross Country: Led the Bucs in all six regular season races — finishing in the top five of each of those with two second place finishes, three third place finishes and a fifth place finish ... That fifth place finish was a memorable one, coming at the NCAA South Region Cross Country Championships and securing his place on the national stage ... As ETSU's first NCAA Championship qualifier in a number of years, Varghese ran a 31:20.2 for a personal record ... He also set a PR at the Louisville Classic 8K with a remarkable time of 23:48.4 ... Took silver at the 2018 Southern Conference Championships with an 8K time of 24:14.0.

2018 Track & Field: Competed in four indoor and seven outdoor meets ... Had three top finishes his freshman year, taking gold at the Buccaneer Track and Field Invitational 5K, the Weems Baskins Relays 1500m and the ETSU Tri-Star Classic 5K ... Scored at the Southern Conference Indoor Championship to end the year, placing third in the 1500m at 3:53.28 (setting a personal record) after having the fastest qualifying time ... Ended the year with a total of nine top five distance finishes.

2017 Cross Country: Had three top five finishes in the 8K to open his career at ETSU, including a pair of third place finishes at the Upstate Invitational and the High Point VertCrosse ... Clocked a faster time in each meet, eventually ending with a time of 24:33.05 in the 2017 Southern Conference Championships ... Finished 20th at the NCAA South Regional 10K with a time of 31:29.3.

Prior to ETSU: Graduated from Daniel Boone High School in May 2017, where he ran both for the cross country and track and field teams as a distance performer...Appeared in the 2014 Nike Cross Nationals (NXN) and was part of the 2014 TSSAA State Championship team.

Personal: Born on March 24, 1999...From Kingsport, Tennessee…Major is undeclared...Son of Susan and Varghese P. Varghese...Cites former high school teammate and current ETSU athlete Josh Routh, as well as head coach George Watts, as reasons why he chose ETSU...Suffered a severe leg injury when he was four years old in a lawnmower accident, but has since recovered and pursued a collegiate track career.