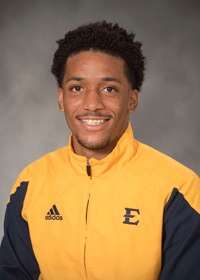 Personal: Born on Sept. 12, 1998 ... from Marietta, Ga. … son of Kirk Benson and Diana Pitts-Benson with an older brother (Kirvonte) and younger sister (Dilynngher) ... Kirvonte,is in his fourth season with Georgia Tech football as a running back, rushing for over 1,000 yards in 2017 … Khayvonn is double-majoring in marketing and sport management at ETSU.