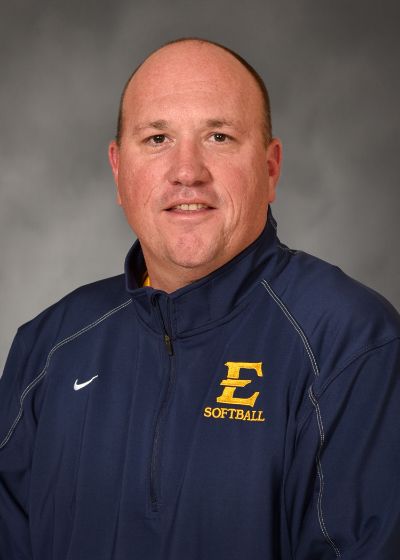 Brad Irwin has been at the helm of the Buccaneer Softball program for nine seasons, as he was introduced as the head coach on July 21, 2010.

During his nine seasons with the Bucs, Irwin has jumped into the driver’s seat as the all-time winningest coach in program history with 164 wins, passing Andrea Roberts.

In 2017, Irwin became the first coach in program history to guide the Blue & Gold to their first-ever Southern Conference Championship and NCAA Tournament appearance. The 2017 Bucs finished the season 29-26, marking the highest winning percentage in program history. In addition, it was just the second winning season in program history and the 29 wins were the second-most by any Buccaneer team. The historic season saw ETSU set single-season records in batting average (.285), doubles (80), RBIs (218), walks (181), on-base percentage (.371), sacrifice flies (17) and saves (13). The Blue & Gold also went 13-5 (.722) at home, which set the single-season home win percentage record.

Overall, Irwin has coached 19 all-conference players during his time at ETSU, including Danielle Knoetze being tabbed as the 2017 SoCon Player of the Year as she became just the second player in program history to earn the honor – the first since 2005. Knoetze was among ETSU’s single-season leaders in hits (4th, 64) and RBIs (2nd, 43), while ranking second in career batting average (.317) and third in home runs (28). In 2017, Knoetze also led the SoCon in home runs, slugging percentage (.629) and total bases (112), while ranking second in RBIs, tied for third in hits, fourth in doubles, fifth in batting average (.360), seventh in runs (34) and 10th in on-base percentage (.397).

In the classroom, 69 student-athletes have been placed on the SoCon Academic Honor Roll and 29 earned all-conference academic honors. During the 2010-11 academic year, the Bucs recorded a 3.495 grade-point average, ranking fifth among NCAA Division I leaders, while eight Buccaneers received National Fastpitch Coaches Association (NFCA) All-American Scholar Athlete honors by posting a GPA higher than a 3.50.

During his tenure at Chattanooga, the Mocs won seven regular season SoCon championships, four SoCon Tournaments and appeared in the NCAA Regional in 2008 and 2009. Chattanooga posted 183 wins during Irwin’s stint from 2006-10, while receiving over 25 all-conference players, two SoCon Pitcher of the Year and two SoCon Freshman of the Year selections. In addition to the on-field success, the Mocs also excelled in the classroom by maintaining a team GPA of 3.0.

From 2003-06, Irwin spent his time at Lee University where he worked with hitters and infielders. The Lady Flames had great success over the three-year stint, as they made the national tournament in 2004 and 2006. Lee University finished the 2006 season with a 55-14 record, finishing seventh nationally in the NAIA National Poll. Irwin and the rest of the Lee softball staff were named NFCA Staff of the Year after winning the Region XI Tournament Championship in 2004.

Irwin also spent time at the high school level as he was the head softball coach at Hixson High School for the 1999 and 2000 campaigns.

Irwin graduated from the University of Tennessee at Chattanooga with a degree in Sports Administration in 1999, while earning his Master’s in Secondary Education from Chattanooga in 2002. Coach Irwin is married to his wife Rachel and they have two children.