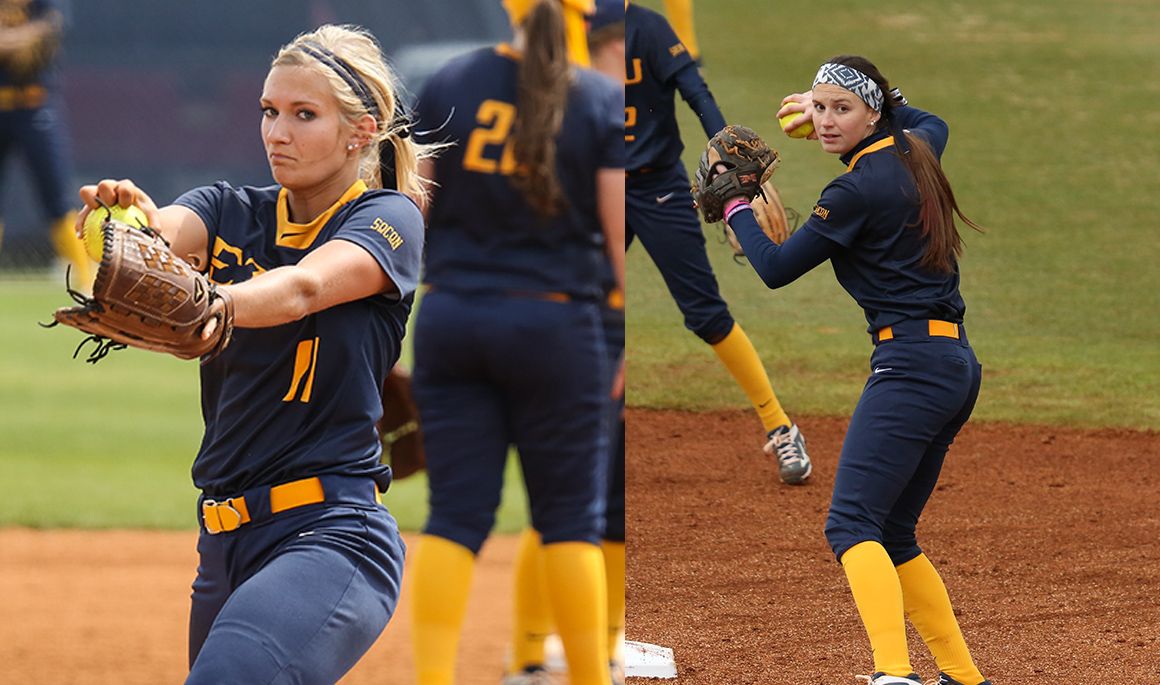 GREENVILLE, S.C. (April 2, 2016) – The ETSU softball team hit six home runs Saturday to sweep a doubleheader at Furman. ETSU won game one by a score of 7-4 and followed that up with a 9-4 triumph in game two. With the pair of victories, the Bucs not only evened their record overall (12-12) but also got above the .500 mark in conference play at 3-2.

Game 1 Recap: A six-run sixth inning by the Bucs proved to be all the offense they would need as they knocked off the Paladins in game one by a score of 7-4. All six runs ETSU scored in sixth were on three-run home runs. The first blast was off the bat of Taylor Carter (Brazil, Ind.), which gave ETSU a 4-2 lead. Four batters later, Samantha Carpenter (Forest City, N.C.) extended the lead to 7-2 with a three-run shot of her own to put the game out of Furman’s reach.

In addition to Carter and Carpenter, Kelsey Smith (Tucson, Ariz.) also posted a stellar offensive performance going 2-for-3 with a solo home run. Smith’s home run was her fourth this season and 16th of her career to move her into a tie for sixth place on ETSU’s all-time home run list with former Buc Tiffany McVay.

Rebecca Wahrmund (Morrilton, Ark.) notched her third victory of the season in game one moving her record to 3-2 this season. Wahrmund, who tossed two innings in the victory, came in to relieve starter Madison Ogle (Maryville, Tenn.) in the fifth after Ogle pitched the first four innings, while allowing just two runs on four hits. Lindsey Fadnek (Coalfield, Tenn.) entered the game in the seventh inning and shutout the Paladins in the final frame to pick up her first save of the season.

Game 2 Recap: ETSU scored three runs in the opening inning and four more in the final frame to seal the sweep of the Paladins Saturday, 9-4. The Bucs’ offensive outburst in game two was powered by 10 hits, including seven for extra bases. In total, ETSU had two doubles, a triple and three home runs in game two.

Two of those three long balls were hit by Carter and Danielle Knoetze (San Diego, Calif.). Carter went 3-for-4 at the plate with a home run and drove in five of ETSU’s nine runs. Knoetze, meanwhile, also went 3-for-4 with three runs scored, a triple and a home run. Carpenter hit the Bucs’ final round-tripper in game two in the seventh to help ETSU seal the victory.

Fadnek picked up her team-leading sixth win of the season in the contest moving her record to 6-3 this season. In addition to her work with the bat, Carter came in to pitch for ETSU in the sixth and tossed two shutout innings to pick up the save.

Next Up: ETSU will look to complete the three-game sweep of the Paladins in the series finale Sunday afternoon. First pitch is scheduled for 1 p.m. at Pepsi Softball Stadium.