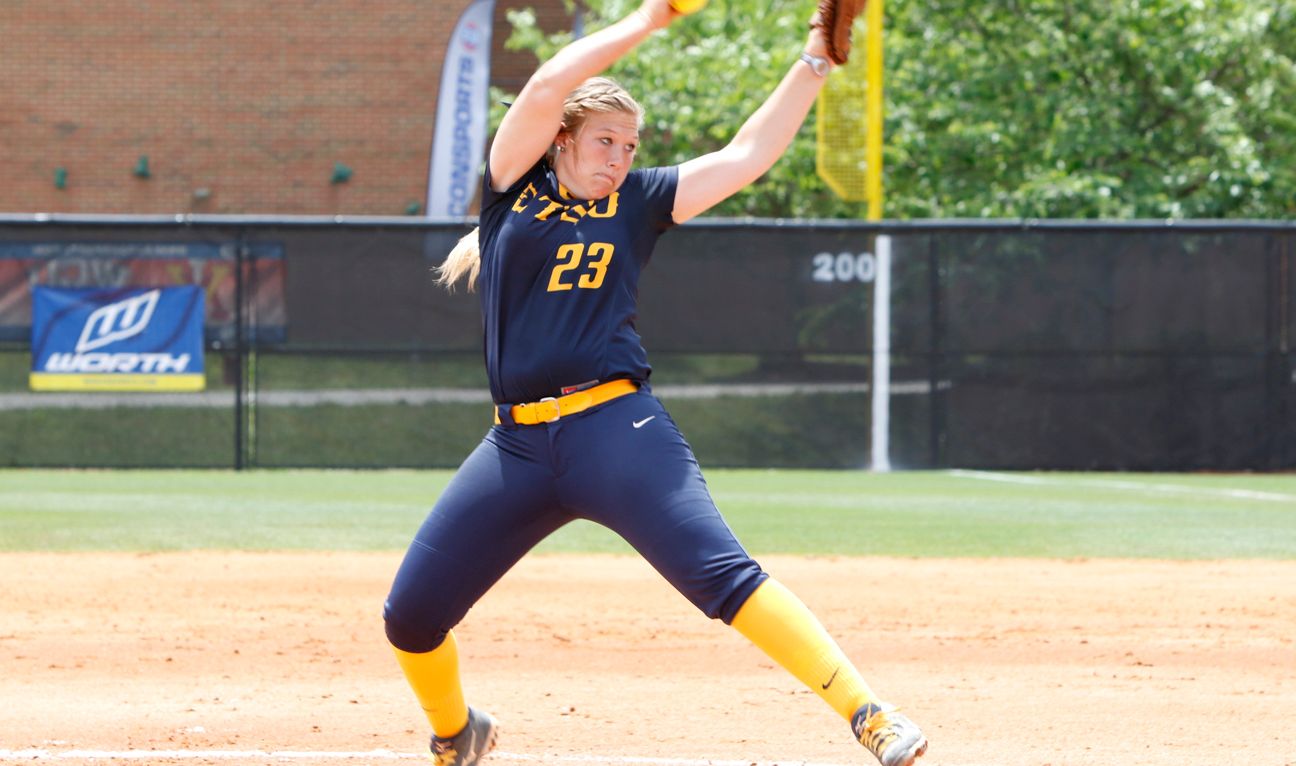 Bucs finish their season with a 20-22 overall record

GREENSBORO, N.C. (May 13, 2016) – After the fifth-seeded ETSU softball team erased an early two-run deficit to tie the game at three, sixth-seeded Chattanooga scored three unearned runs in the top of the seventh inning to eliminate ETSU from the SoCon Tournament Friday afternoon in Greensboro by a score of 6-3. The Bucs finish their 2016 season with a record of 20-22 overall, which translates to a .476 winning percentage. It is the program’s highest mark since 2009 (.491).

The Bucs scored first for the 18th time this season with a RBI single by Kelsey Smith (Tucson, Ariz.) in the bottom of the first inning. Chattanooga, however, would answer in the top of the fourth with a three-run home run by Anyssa Robles to put the Mocs in front, 3-1.

ETSU rallied to tie the game with a pair of runs in the bottom half of the sixth. The Bucs’ rally was powered by three hits and a pair of walks all with two outs in the frame. Bethany Cowart (Ringgold, Ga.) drove in fellow senior Samantha Carpenter (Forest City, N.C.) to get the Bucs within one and Taylor Carter (Brazil, Ind.) drew a walk with the bases loaded to score the tying run.

Chattanooga answered immediately in the following half inning with a rally of its own. The Mocs began with a single, a walk and an ETSU error. With the bases loaded, Chattanooga pulled ahead with a wild pitch and Criket Blanco plated two more runs a batter later with a single to seal the 6-3 win over the Bucs.

Three different players registered multi-hit performances Friday. Smith and Carpenter both went 2-for-4 at the plate, while Danielle Knoetze (San Diego, Calif.) went 3-for-4 for the second straight game. Following the tournament Saturday, Knoetze was named to the All-Tournament Team after going 6-for-8 in the event.

Sophomore Madison Ogle (Maryville, Tenn.) was dealt the loss after allowing six runs (three earned) in seven innings of work to go along with four strikeouts. Ogle finishes the season with a 2-5 record and a 3.50 ERA.

ETSU, which will lose five seniors to graduation, are set to bring back 18 players from this season’s team for 2017 including its entire pitching staff.