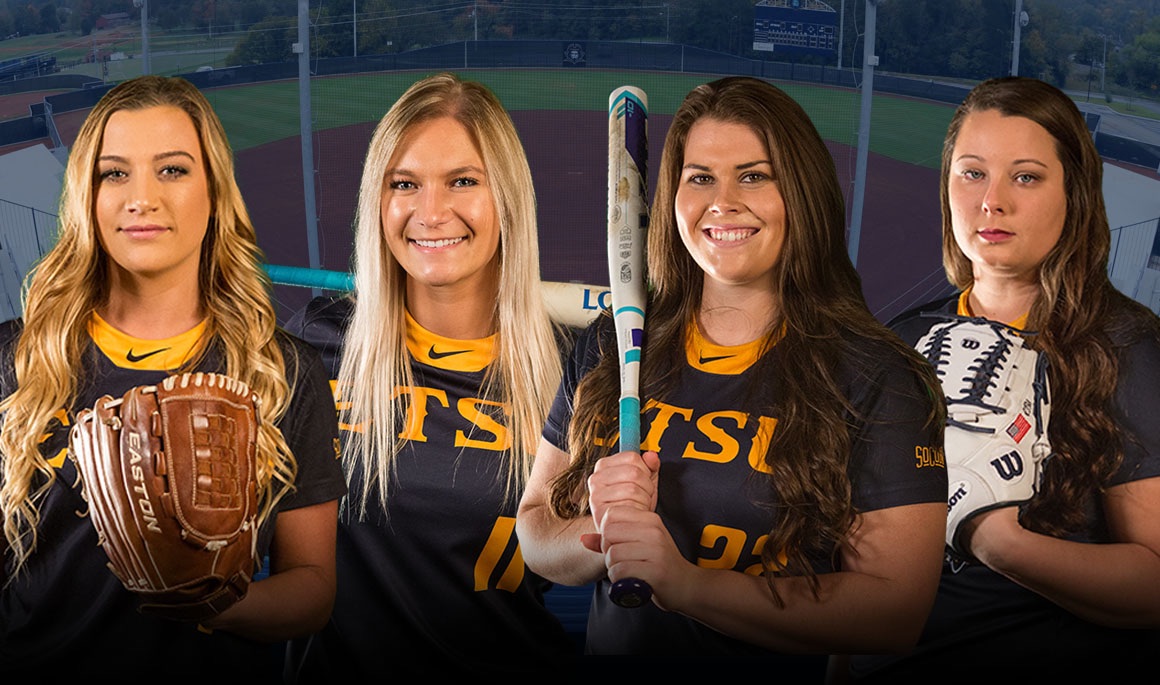 SPARTANBURG, S.C. (Feb. 2, 2017) – With the 2017 softball season set to get underway next weekend, the Southern Conference released its preseason all-conference selections on Thursday, and ETSU had four players represented between the first and second teams.

The Bucs – who are coming off one of their most successful seasons a year ago – were led by senior Danielle Knoetze (San Diego, Calif.) as she garnered first team accolades, while Taylor Carter (Brazil, Ind.), Lindsey Fadnek (Coalfield, Tenn.) and Kelsey Smith (Tucson, Ariz.) landed second team honors.

Knoetze hit a team-leading .338 (44-130) with five doubles, two triples, nine home runs, 24 runs and 17 RBI in 39 games in 2016. The San Diego, Calif. native also led the Blue and Gold in hits and tied for the team lead in home runs, while the Buccaneer slugger ranked 10th in the SoCon in slugging percentage (.615). Knoetze earned SoCon all-tournament team honors where she finished 6-for-8 with two runs scored. Overall, Knoetze led the Bucs with 13 multi-hit games and hit safely in nine straight game from Feb. 20-March 12. The Buccaneer senior set personal single-season bests in batting average, hits, doubles and RBI.

Carter started all 42 games a year ago and hit .323 (41-127) with 13 doubles, nine home runs, 26 runs and 26 RBI, while also going 1-1 with one save in 10 appearances (three starts) in the circle. The senior first baseman finished tied for seventh in the conference in doubles and ranked eighth in slugging percentage (.638). Like Knoetze, Carter also set personal single-season highs in average, hits, doubles, home runs, runs and walks. Carter’s slugging percentage was the second highest by a Buccaneer in single season history, while her nine homers are tied for fourth with Knoetze.

Smith played in 37 games with 35 starts and totaled 25 hits, two doubles, eight home runs, 13 runs and 24 RBI for the Blue and Gold. The Tucson, Ariz. native played a significant role come conference play as she went 14-for-51 with seven home runs, nine runs and 18 RBI in 17 starts. Smith finished with six multi-RBI games, including career-best 4-RBI efforts against Western Carolina (March 26) and at Mercer (April 16). In addition to her four-RBI game at Mercer, Smith also belted a pair of home runs, marking the third time in her career she has accomplished the feat. Smith, a SoCon Honor Roll selection, also earned four saves in the circle, which marked the second-most by a Buccaneer pitcher in program history.

Fadnek led the ETSU pitching staff in several categories in 2016. The Coalfield, Tenn. native led the squad in wins (11), strikeouts (94), innings pitched (90.2), and opponent's batting average (.241). Fadnek was named the SoCon's Pitcher of the Week on March 7 and April 18. In Fadnek's best start of the season she struck out 14 batters in a March 5 victory over Morehead State. The 14 strikeouts are the third-most by an ETSU pitcher in a single game in program history.

Furman earned five of the seven first-place votes and was picked to finish first, while reigning SoCon champion Samford picked up the remaining two first-place nods and was selected to finish second. The Paladins totaled 33 points and Samford totaled 31 points. Mercer and Samford were tied for third with 20 points, while ETSU was picked fifth with 17 points. Chattanooga and Western Carolina were picked to finish tied for sixth.

ETSU opens its 2017 season next Friday, Feb. 10 when the Bucs take on North Carolina A&T at the Gardner-Webb Tournament. The Blue and Gold also take on Gardner-Webb on Friday, while playing Alabama A&M on Saturday before bracket play concludes the tournament Saturday evening and Sunday.